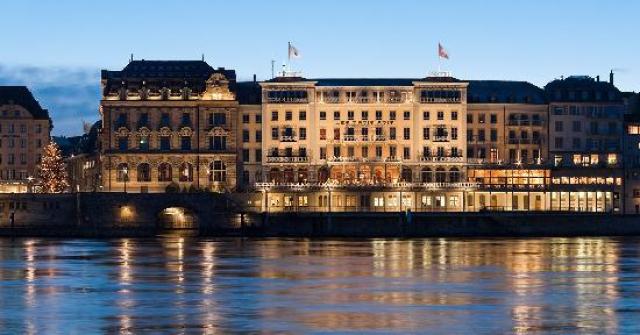 One of the oldest Swiss hotels “Grand Hotel Les Trois Rois”, located in Basel downtown, on Rhine riverside is in the middle of the sales deal, with Russian businessmen performing as the potential new owners. The hotel was officially opened in 1844, on the place where in the XI-century was located a castle, which had sheltered a historical meeting of the Holy Roman Emperor Conrad II, his son and the king of France Henry III, and the last king  of Burgundy Rudolph II — it is possible that this exact historical event gave the famous hotel its name “Three Kings”. Other historical documents claim that construction of the hotel happened in 1681, while in 1844 it was simply refurbished. “Three Kings” is one of the oldest European hotels, the guest book of which reads like a “Who’s who” of world history. Napoleon, Elizabeth II, Pablo Picasso, Thomas Mann and many other leading figures have enjoyed the hotel’s legendary hospitality.

In 2004 the hotel was bought by billionaire Thomas Straumann, a 1153-wealthiest businessman from the Forbes list, with fortune estimated at $1 billion, the owner of Straumann Holding, a tooth-implants producer. Straumann had initiated a big reconstruction process, which returned the hotel to its initial looking, and relaunched it in 2006. Due to the financial crisis, Straumann’s financial positions had significantly weakened, and his fortuned had decreased almost by a third compared to 2011 numbers (from $1.3 to just $1 billion). This fact had initiated market rumors, that the hotel “Les Trois Rois”, or another hotel “Grand Hotel Bellevue”, which also belongs to Straumann can be sold on the market to help recover businessman’s financials.
One of the brokerages, familiar with the situation, told that information about potential purchase of the hotel by a group of Russian-Swiss investors had appeared in the beginning of this year. Supposedly, this group of investors represents interests of co-owner and Chairman of the Board of the Russian chemical and fertilizers plant “Toggliattiazot” Sergey Makhlai (the son of the oligarch Vladimir Makhlai, rated on 140th position in Russian Forbes list with estimated fortune of about $0.7 billion. Vladimir Makhlai lives in London since 2005, hiding from the prosecution launched in Russia.
Sergei Makhlai visits Switzerland on a constant basis, and according to some sources even have a residence permit issued by the country’s authorities. One of the Makhlai’s partners in the chemical business is the Swiss trading firm Ameropa AG, which exports mineral fertilizers of Russian origin and sells them around the world. According to the sources, negotiations with the current owners of “Les Trois Rois” hotel led by the team which also includes the head of Ameropa AG, Andreas Tsivi. Transaction value for this deal is roughly estimated at around 60 million Swiss francs for the controlling stake in the hotel.
In the recent years, Swiss authorities had initiated a number of measures to counter the process of acquisition of real estate in the country by foreign buyers with opaque sources of income. Though, these measures are regulating the transactions in the sphere of private  residential real estate, while the purchase of a hotel can help to avoid the regulation. It is the possibility, that one of the conditions of the deal set by the new owners was full or part reconstruction of the hotel, to make it suitable for personal accommodation.
This is not the first example of a Russian ‘oligarch’ buying into the Swiss hotel. Russian media had reported that in December, 2011 a 48-years old Russian businessman Georgy Bedzhamov has bought a 33% stake of the luxury five-star hotel Badrutt’s Palace on a Swiss ski resort St. Moritz. The purchase vas valued at the 30 million Swiss francs and was managed through a Luxembourg-registered company.
Filed under: Automotive, Business
Share Tweet Pin G Plus Email
previous article: Tips To Help You Get Your Credit Under Control!
next article: Is Every Pension Fund in America Bankrupt?