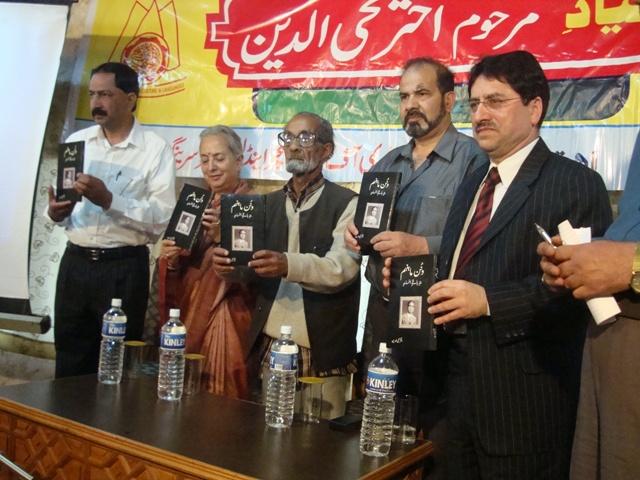 Srinagar, May 23  – Rich tributes were paid to Legendry Kashmiri writer Akthar Mohi ud  Din in an impressive  function organized in Srinagar by Jammu  and Kashmir Academy of Art, Culture and Languages , this afternoon. Prominent Kashmiri Poet and Scholar Amin Kamal Presided over the this Programme held on his 8th Death Anniversary   and was attended by cross section of society including galaxy of local writers of Urdu,  Kashmiri and other regional languages of the State. Farooq Renzu Commissioner Municipal Corporation, , Eminent Educationist, Prof Neerja Mattoo and Zaffar Iqbal Manhas, were also in presidium.

Welcoming the guests Zaffar Iqbal Manhas , stated that the best way to pay tribute to our legends who devoted their whole life for development of literature is to comprehend their thoughts and to  carry forward their ideology adding that this very programme is a step forward in this direction. He said in coming days we are planning to organize a series of programmes to highlight the contributions of our legends that enriched the regional literature of various languages of the State including Kashmiri which is on our priority.

Amin Kamal in his address said that the contributions of late Akther Mohi-ud-Din was no doubt remembered for all time to come for the reason that  he was a trend setter among the Kashmiri prose writers. He said that all Kashmiri speaking people must read Kashmiri so as to know their legacy which is surviving since centuries. He said that works of Kashmiri Writers including the writings of Akhetr Mohi-ud-Din demands readership and wide circulations.

Prof. Neerja Mattoo described Akther Mohi-ud-Din as a world class writer adding that his writing could be compared to the writing of any developed language including English .She said that English Translation of his writings would prove it that Akther was a writer of feelings and thoughts.

Frooq Ranzu said that Akther Mohi-ud-Din was not only a good writer a best teacher but an excellent human being who was also a pioneer contributor of Kashmiri prose.

Azhar Hilal , the son of Akther Mohi-ud-Din  was also spoke on the occasion.

A book entitled WUNUN MA BENYAM , a compilation of  unpublished work of Akther Mohi-ud-Din was also released on the occasion.

A Website highlighting the contributions of Akther Mohi-ud-Din which can be browse at www.aktharmohiuddin.com also launched on the occasion .

A research paper on life and work of Akther Mohi-ud-Din was read out by Syed Yaqoob Dilkash.