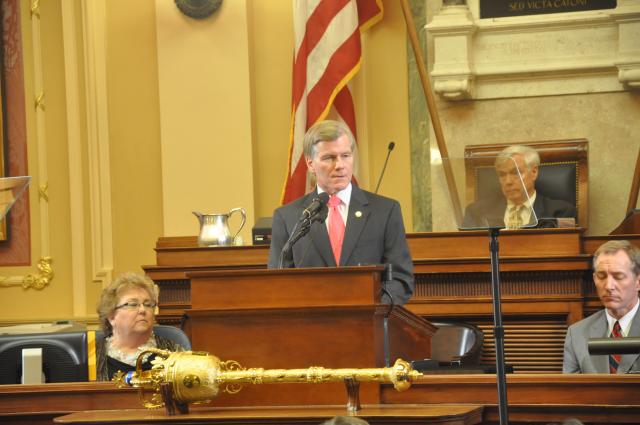 RICHMOND – Gov. Bob McDonnell’s goals for his last year in office drew mixed reactions among legislators representing the Williamsburg area.
Education, transportation, healthcare, workforce development and the restoration of rights were the most important issues among local legislators.
Delegate Michael Watson, R-Williamsburg, issued a press statement praising the governor’s education and workforce proposals.
“I am happy to hear that there is a focus on both K-12 education and workforce development,” said Watson. “In fact, I have been working with the governor’s office on workforce development legislation.”
Delegate Brenda Pogge, R-Williamsburg, applauded McDonnell’s transportation proposals and said she thinks it will pass in the House because it is a broad based plan.
“I think the transportation package he has is the best I’ve seen since I’ve been in the General Assembly,” Pogge said. “I do intend to support it and I think the public will be happy with it.”
State Sen. John Miller, D-Newport News, said in a press statement that he supports McDonnell’s initiatives to help improve third grade reading scores and the restoration of rights bill. However, he isn’t satisfied with all of the governor’s agenda.
“I am disappointed in his refusal to expand healthcare coverage to uninsured Virginians, his massive expansion of the sales tax to pay for transportation, and his plan to take away local control from some schools,” Miller said.
McDonnell gave his last State of the Commonwealth address Wednesday night at the Capitol to kick off the beginning of the 2013 General Assembly session. McDonnell outlined his plans for many hot-button issues, including transportation, education, mental health, and restoration rights for nonviolent felons.
McDonnell said his top priority this session is a long-term transportation funding plan for Virginia. This plan would eliminate the 17.5 cents per gallon gas tax and increase the sales tax by 0.8 percent. Virginia would be the first state in the union to eliminate the gas tax.
McDonnell also said he wants to invest another $3.1 billion into the state’s transportation network over the next five years. The entire plan will add $1.8 billion in new construction spending.
“Do not send me a budget that does not include new transportation funding,” said McDonnell. “We are all out of excuses. We must act now.”
McDonnell also proposed new education reform. The governor wants to give a two percent pay raise to teachers and other instructional personnel, which would be their first state-supported raise in six years. In addition, McDonnell wants to give $15 million to school districts with high performing teachers. But the catch is, McDonnell has proposed to actually grade schools.
“We should grade schools like we grade students’ papers and tests,” McDonnell said. “I’m proposing an A-F school ranking scale to empower parents and students to demand excellence.
The governor gave his endorsement to the restoration of rights bill introduced by Delegate Greg Habeeb (R-8th) and Peter Farrell (R-56th). This bill would allow an automatic restoration of rights to non-violent offenders. Attorney General Ken Cuccinelli also said he would support the legislation.
Education seems to already have bipartisan support from both Republicans and Democrats. Both legislators agree that McDonnell has an ambitious agenda for his last year in office.
Filed under: Politics, US
Share Tweet Pin G Plus Email
previous article: Kenya’s Special High Court Confronts Challenges
next article: Zalicus shares drop along with drug