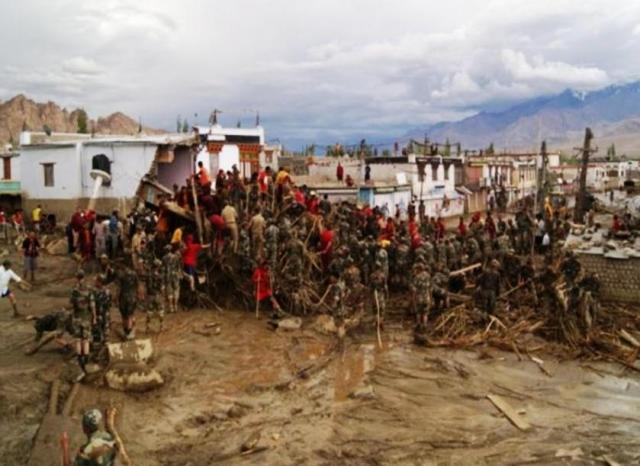 Leh/Srinagar August, 07 (Scoop News) –  Till the last reports came in, 30 Army men and approximately 400 civilians are still missing. 33 Army personnel and 400 civilians are being treated in various hospitals at Leh , officals said .
Officals said that the ongoing rescue and relief operations by the Army continued for the second day, after the catastrophic cloud burst wreaked havoc in Leh town and its adjoining areas. Several Coulmns of the Army alongwith heavy machinery resumed the rescue in and around Leh town and for flung remote villages. The locals from the town and adjoining areas had moved to the adjoining heights, fearing the inclement weather during the night.

Defence PRO said that the area still remains cut off from the country and is experiencing unseasonal inclement weather conditions. Due to which the traffic on the highway has been disrupted at a number of places. With the shortage of essentials enroute, the Army has deployed numerous detachments along the Leh-Manali axis to assist the stranded tourists, both domestic and foreign. All stranded tourists have been provided with food, shelter, medical aid including life saving drugs. Since, there is a shortage of food items specially vegetables and the affected locals are unable to cook, the Army has established kitchens at all the disaster sites to provide cooked meals to the people. The Army is also distributing rations to the needy in conjunction with the civil administration. The Army Signals were pressed into service to restore the communications on priority. Satellite and radio communications have been established at important locations. Four rehabilitation centers have been established with all logistics support which is catering for approximately 250 people in each center.

The traffic on Leh-Srinagar highway too, remained disrupted due to land slides and bridges being washed away at a number of locations. The Army engineers are clearing the landslides and launching the essential bridges, so as to open both the highways to traffic. On opening of Leh airfield to air traffic, the relief material was flown in for the effected locals.