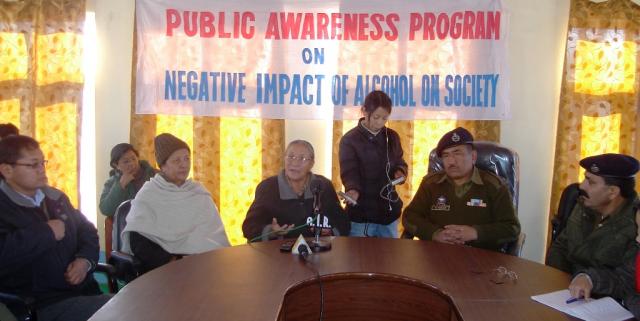 Leh, December 31 (Scoop News) – Leh Police has organized a one day awareness camp on the topic” Negative Impact of Alcohol on Society” today at Police Post Housing Colony Leh in which the Sarpanches, Nambardars and other community representatives participated.

Welcoming the doctors and the public representatives, the Additional SP, Leh P Sonam said that the main aim of holding this camp was to sensitize the general public about the adverse impact of alcohol on a small society like Ladakh and to highlight social responsibility to stop this most threatening menace. P. Sonam said that  major cause behind the crimes and accidents taking place in the district are directly or indirectly linked with alcolhlism and therefore the society at this crucial juncture collective or individually need to play their role to lead Ladakh towards brighter and healthier future.

Dr, Lhadol in her brief speech strongly argued alcohol as the main source for all negativity in the society including the prevailing threats of HIV Aids in Ladakh saying that once a person become drunk, there is every possibility of losing his character and mind. For the sake of Ladakh’s future, Dr. Lhadol stoutly urged upon each and every Ladakhis to walk up and put a decisive efforts to keep the society on right tract before it is too late.

The Councilor Tsering Angmo said that the present Ladakhi society has already witnessed so many unpleasant incidents in the wake of growing menace of alcoholism mainly among the younger generations. She said that Police and Doctors can’t  stop this nuisance  unless the whole society is walk up and launch a critical movement to completely root out alcoholism  from the society.

Dr. Tashi Thinles in his power point presentation highlighted  detail consequences of alcohol in the small society of Ladakh and also brought solution to this problematic issue.

The Dy. SP, Abdul Khaliq told about the role of Leh Police in checking illegal trade of alcohol besides their policing in and around Leh city saying that the prompt actions and raids of police has tremendously reduced  illegal alcohol trades and road accidents.

The Police Inspector Tsewang Dorjey told that 70 to 80% of road accident in Leh district has been related to alcoholism witnessing death of 30 to 40 persons annually, besides a huge number alcoholic people either died or battling for life in the hospitals.  He urged upon the public representatives to take drastic initiatives to stop alcohol at village level in all parts of Leh district to save our posterity from  this hazard and give a chance for healthy and prosperous Ladakh.