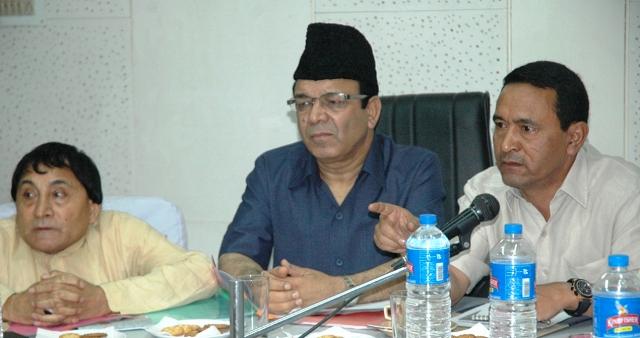 Jammu/Leh,April 19 (Scoop News) – J&K Minister for Finance and Ladakh Affairs, Abdul Rahim Rather in a high-level meeting held here today  said the , after remaining closed during winter months, would be reopened for heavy vehicular movement from April 22 this month whereas the light vehicles have already started plying on the road from April 17th. This will fulfill the demand of the people of twin districts of Leh and Kargil who were eager for opening of the road early this year.

The meeting discussed and finalized the plan for movement of vehicles on particularly on , convoy timings for smooth flow of traffic and arrangements relating to disaster management enroute the highway.

The meeting also approved Convoy timings according to which all the heavy vehicles shall have to cross Drass-
Gumari stretch between 6 a.m. to 10 a.m. whereas the vehicles from have to cross Sonamarg-Drass stretch between 11 a.m. to 3 p.m. However there shall be no time restriction for light vehicles except during road repairing to be undertaken by the BEACON between 3 p.m. to 8 p.m.

The meeting also discussed a 6 months truck movement schedule based on the requisition of various departments commencing from the month of May up to September 2010. As per estimates 18300 truck trips are required to build bumper stocks of foodgrains and other essential commodities including construction material and fertilizers.

It was decided that the total regulation and management of traffic movement on the highway would be managed exclusively by the Traffic department. However, the district police, Kargil would also be associated in regulating traffic especially on

Rather directed the concerned departments and agencies to immediately put in place adequate men and machinery to regulate traffic on the highway.

Rather also asked the District Development Commissioner, Kargil to immediately formulate and put in place a comprehensive disaster management plan including first aid facilities to meet any exigency of emergency situations in the wake of routine weather vagaries on the highway. He also called for setting up of a monitoring cell at Sonamarg on the pattern of to oversee flow of essential commodities and quality of food grains.

Qamar Ali Akhoon said that Government would explore all possibilities to install an additional weighbridge at Sonamarg to cope up with the rush of vehicles adding that as per records, about 250 to 300 trucks pass through the existing weighbridge per day. He said Consumer Affairs and Public Distribution department and Food Corporation of have planned to complete stocking/dumping of foodgrains and essential commodities for 18th months as compared to 16 months previous year by the month of September this year.

Jora called for dumping quality timber wood to meet the requirements of the people of Leh and Kargil districts. He also called for adequate stocking of essential commodities across Ladakh region.