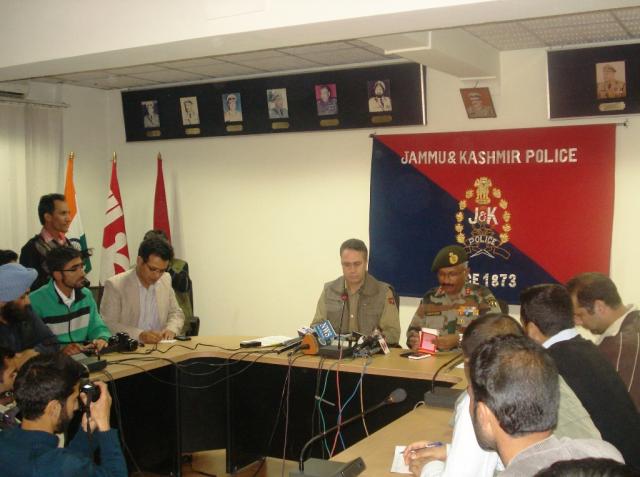 Giving details IGP said that on 17/04/13 based on a specific information a joint team of Police and Army 22 RR apprehended a Pakistani terrorist Qari Naveed alias Fahad Ullah resident of Multan who was functioning as styled Divisional Commander of Lashkar-e-Toiba terrorist outfit in North Kashmir.

Based upon his information about presence of two more militants in an orchard at Wagub village, a joint team of Police and Army and CRPF was launched an operation and the area was sealed off. Two militants hiding in the orchards upon seeing security forces fired upon the advancing SF parties and in the retaliatory fire one militant was killed. The slain militant was later identified as Shabir Ahmad Sheikh alias Tameem alias Sufiyan resident of Palhalan who was master mind in killing of one Sarpanch Ghulam Mohammad Yatoo resident of Palhalan, Pattan Baramulla on 10-09-12. Another militant, reportedly Hilal Molvi alias Khalid of Palhalan escaped from the area taking advantage of people working in the orchards.

2 Ak rifles, 5  Ak magazines, 2 Pistols, 5 grenades, 150 Ak and pistol rounds were recovered from  possession of the arrested and killed militant.

Fahadullah alongwith one slain militant Urfi Dar alias Husham of Sopore was involved in the killing of SPO Reyaz Ahmad at Brathkalan Sopore, in the month of September 2012. He also master minded a series of grenades attacks in town Sopore in the months of July, August and September 2012, injuring many civilians and security forces personal, further investigation with regard to involvement of terrorists is being investigated.

Fahadullah had taken over the command of LeT in North Kashmir and was operating in Sopore area after the killing of Abdullah Uni and then Akash Badar in Sopore.

Filed under: Media & Tech, World
Share Tweet Pin G Plus Email
previous article: What Did You Do On Your Professional Development Day “Off”? Nine Executive Lessons Learned in an Unu
next article: Vakil hailed the stand taken by APHC against drug mafia