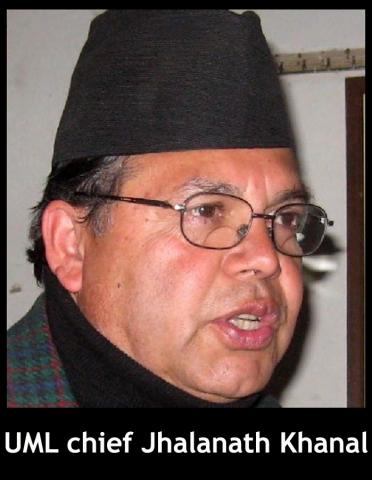 Nepal’s Unified Marxist-Leninist (UML) Chairman Jhalanath Khanal has proposed in his party meeting on Friday for the new national government under the leadership of the Unified Communist Party of Nepal Maoist (UCPNM), party sources said.

However, other senior leaders in the UML are understood to have strongly objected to this idea. K P Oli and Madhav Nepal have stressed on forming the next coalition government under their own leadership.

Meanwhile Nepali Congress Vice-President Sushil Koirala on Friday publicly said that Nepali Congress would not join the government under the Maoist leadership. “We are democrats, Maoists are not. Our ethics does not allow us to support Maoists at any cost,” he added. Moreover, he scolded the UN Mission to Nepal and said that the Maoist combatants’ verification must be done again. One year ago, he had scolded the UN in Nepal many times during his political speeches within Nepal.

Nepali Congress has been resisting any conscious efforts for changes in Nepal.