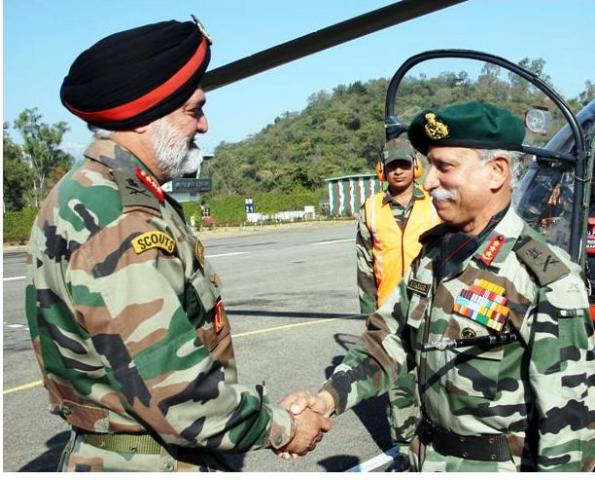 According to Defence PRO, Lt Col Rajesh Kalia that the General is an alumnus of the , Khadakvasla and was commissioned into the 2 RAJPUTANA RIFLES on 31 Mar 1972. After early years of regimental service and staff appointments, he graduated from the , . He has done the Senior Command, Higher Command and courses. During his long service career, he has held a variety of sterling and balanced portfolio of Command, Staff and Instructional assignments.

He said that the Army Commander takes over Northern Command with his vast experience in counter insurgency and high altitude warfare. He commanded 2 RAJPUTANA RIFLES in Rajasthan Sector () and J & K, an Infantry Brigade in OP PARAKRAM on the LC, and a Mountain Division in a High Altitude Area of Sikkim. Before taking over as Director General of Perspective Planning, the General Officer commanded the prestigious Indian Military Training Team (IMTRAT) at and a Corps in the North East.

The General has held a number of prestigious staff appointments to include General Staff Officer 1, Military Operations Directorate; Colonel General Staff of a Mountain Division in Counter Insurgency Operational Area; Director’ Perspective Planning and Colonel Military Secretary 3D at Integrated Headquarters of Ministry of Defence (Army),PRO said. In addition, he has had the unique distinction of holding the appointment of DCMO/Chief of Staff in the UN Mission, Angola from Aug 1997 to Jul 1999, Brigadier General Staff of a Strike Corps, Deputy Director General of Operations Logistics, and Additional Director General Military Intelligence at Integrated Headquarters of Ministry of Defence (Army). The General Officer has also held various instructional appointments, at , IMTRAT () and Army War College Mhow.

General Parnaik’s operational experience includes Op CACTUS LILY in 1972 and various counter insurgency operations in the North Eastern Sector and Jammu & Kashmir. For his distinguished service in North Eastern Sector, he was awarded the Chief of Army Staff Commendation Card twice. He was also honoured with the award ‘Yudh Seva Medal’ in 2003 for his exemplary conduct of operations while in command of an Infantry Brigade during Op PARAKRAM. The General Officer is also honoured with the Gallantry Award of ‘Uttam Yudh Seva Medal’ for his command of 4 Corps during Op Rhino, in 2010.