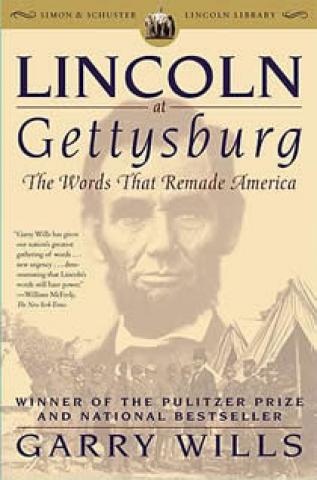 Wills evokes the stink of the corpses, some barely covered at the time of this historic dedication:

A nurse shuddered at the all-too-visible "rise and swell of human bodies" in these furrows war had plowed…. Householders had to plant around the bodies in their fields and gardens, or brace themselves to move the rotting corpses to another place. Soon these uneasy graves were being rifled by relatives looking for their dead — reburying other bodies that they turned up, even more hastily (and less adequately) than had the first disposal crews. Three weeks after the battle, a prosperous Gettysburg banker, David Wills, reported to Pennsylvania’s Governor Curtin: "In many distances arms and legs and sometimes heads protrude and my attention has been directed to several places where the hogs are actually rooting out the bodies and devouring them."

Here is one sentence from the Prologue:

Lincoln was still wearing a mourning band on his hat for his dead son.

(That’s on the day of the Gettysburg Address.) 48,000 men died in the battle — at least — and Lincoln was grieving for his son Willie!

Wills brilliantly rehabilitates Edward Everett, the main speaker at Gettysburg, who is often ridiculed by historians. Lincoln at Gettysburg explains what a two-hour speech meant in 1863. (It was essentially a TV miniseries.) Americans were much less visual then; they liked listening to smart guys talking. And it was logical that Everett spoke so much longer than Lincoln; he delivered the "Oration," whereas Lincoln, on the program, is credited with "Dedicatory Remarks." Everett’s performance freed Lincoln to speak in a telegraphic style, without mentioning slavery or the name of the battle.

This book also expansively describes Victorian cemeteries. They expressed a spiritual environmentalism, plus a re-paganization of

Christian culture. It all comes out of Romanticism:

As with most romantic developments, Rousseau had pioneered this communion with nature as an opening onto other worlds. In his Musings of a Lonely Rambler (Les Rêveries du promeneur solitaire), he told how he lost the sense of a division between himself and the things he impinged on. He flowed out to the world, and it flowed in. He compared this to the bliss he felt on recovering consciousness after being knocked out in an accident. To recover such "transcendings" of himself, he practiced techniques of autohypnosis — rhythmic walking, "a regular and gentle motion without jolt or interruption," or the contemplation of waves whose "flux and reflux, and continued sound neither swelling or ceasing," created interior movements as gentle and suggestive as the water’s.