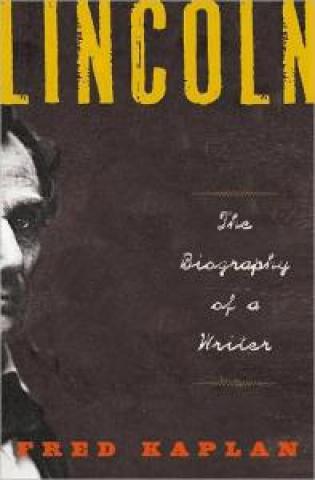 This is a vexing book, a book that disappoints almost with every line. Yet like Lincoln himself, it loses all the battles and wins the war. Lincoln: The Biography of a Writer is the first book to propose Lincoln as an intellectual, and its argument is bright and convincing. Lincoln was not exactly a politician, despite his talents at manipulating friends and enemies. Basically, he spent the 1850s articulating a single argument, against the spread of slavery. Eventually his argument was so compelling that he won the nomination of the newborn Republican Party. Because four candidates were running for president, Lincoln squeaked in to the White House, winning not a single Southern state. (In most of them, he wasn’t on the ballot.) Meanwhile, Lincoln was writing — sometimes actual poetry! Lincoln’s poems are lousy, but determined. Says Kaplan:

In the same letter to [Andrew] Johnston he fulfilled his promise to send a copy of a poem he admired, "Mortality," the name of whose author neither Johnston nor Lincoln knew because it had been published anonymously… When Johnston intimated that Lincoln might be its author, the latter made clear how much he aspired to write such excellent verses. "I would give all I am worth, and go in debt, to be able to write so fine a piece as I think that is."

(Lincoln was wrong. "Mortality" is doggerel, like a lot of the poetry he loved.) (Andrew Johnston was the editor the Quincy Whig, a newspaper in Quincy, Illinois.)

Abraham Lincoln was a contemporary of Karl Marx, and theorized about labor, just as Marx did. In major areas, the two men agreed. But Lincoln was a born entrepreneur, and saw life entrepreneurially. At times, he was even a writing entrepreneur, creating an eccentric lecture on the history of inventions in April, 1858, with the goal of becoming a celebrated public speaker. Yet Kaplan shrewdly defends that lecture, quoting:

Fishes, birds, beasts, and creeping things, are not miners, but feeders and lodgers, merely. Beavers build houses; but they build them in nowise differently, or better now, than they did five thousand years ago. Ants, and honey-bees, provide food for winter; but just in the same way they did, when Solomon referred the sluggard to them as patterns of prudence.

The more I read Lincoln’s words, the more complex he grows. Incidentally, here is the second stanza of the best Lincoln poem, "The Bear Hunt":

When first my father settled here,

‘Twas then the frontier line:

And bears preyed on the swine.

Filed under: Media & Tech
Share Tweet Pin G Plus Email
previous article: UFC 137 Preview: Georges St-Pierre Vs. Carlos Condit for the UFC Welterweight Championship
next article: How to Get A Right Moving Company In Delhi