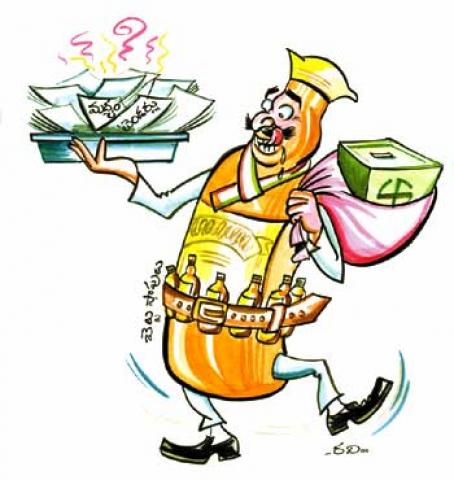 Andhra Pradesh government issued a tender notice for the license of the Liquor shops for the coming next 2 years.

Many Contractors make the bids almost double to triples prices as the tenders got in the past. Nearly 6,588 Wine Shops will get the licenses and the government will got the amount of 1649.49 Crore rupees in the name of license fees.

In this term the Government had increased around 15% on tax and estimated to get around 40% more income from the liquor business.

In Hyderabad alone almost 85 shops are there and each shop paid around more than 1 Crore rupees for the license.

In the Information Technology Hub Madhapur the bid went to highest amount of 2.07 Crore rupees.

Areas like the Uppal, Kothaguda, Kondapur etc. are almost got the bids of highest amounts more than 2 Crore rupees.

Now the estimation of income will going to cross 30,000 Crore rupees in the each financial year.

For a shop which is paying 2.05 Crores the daily license fees is about 28 Thousand rupees. Including other expenses the amound will be almost 40 Thousand rupees. To recover this amount the shop has to sell atleast 2 lakh rupees liquor per day.

Finally where the liquor free dream is? Governments are going to encourage the Anti-Gandhian Priciples.