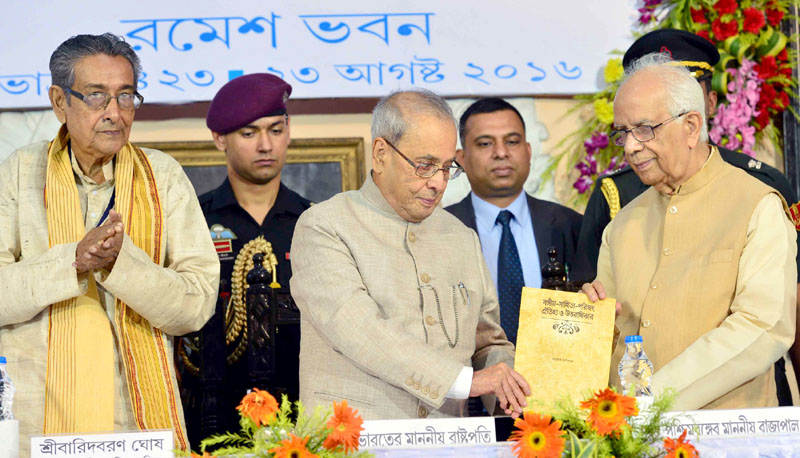 The President, Mr. Pranab Mukherjee at the 125th Anniversary Celebration of Bangiya Sahitya Parisad, in Kolkata on August 23, 2016.

‘Literature An Ample Reflection Of Society And Its People At Large’

Speaking on the occasion, the President said that he had been a member of the Board of Trustees of Bangiya Sahitya Parisad which had luminaries like Mr. Ramesh Chandra Dutta, Rabindranath Tagore and Ramendrasundar Trivedi at its helm. He stated that the Bangiya Sahitya Parisad has played an important role in promoting literature and preserving numerous valuable literary manuscripts since its inception in 1893. The 13000 manuscripts housed in the institute’s library are rare treasures which must be preserved at any cost and for that, all necessary arrangements must be made. The Parishad is associated with the history of Bengali literature.

The President said that literature not only pertains to creative work, but is also an ample reflection of society and its people at large. Hence, world literature that is a reflection of the geography, history, society and daily life of people must be preserved for being handed over and studied by future generations.

The President also informed that Bangiya Sahitya Parishad has received a corpus fund of Rs. 10 crores from the Union Ministry of Culture. He stated that this and other similar grants can be well utilized towards preservation of the priceless manuscripts available in this institution.

Filed under: Education, News
Share Tweet Pin G Plus Email
previous article: The Calculative Side of Accounting and its Aspects
next article: Vice President Releases The Book ‘Patriots, Poets And Prisoners’