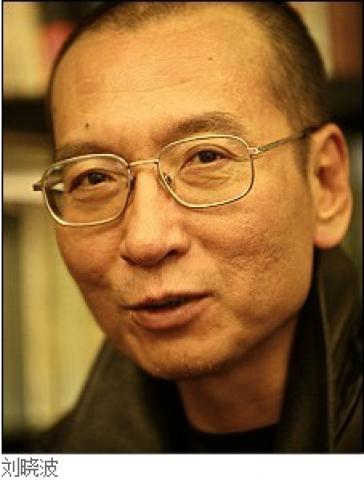 A few hours ago, the Norwegian Nobel Committee announced its decision to award the 2010 Nobel Peace Prize to Liu Xiaobo for his long and non-violent struggle for fundamental human rights in China.

It is a moment of great joy for concerned Chinese citizens as Liu Xiaobo represents human rights activists’ determination in struggling for the peaceful transformation of China’s political system. He was arrested in June 2009 and sentenced to 11 years imprisonment under the charge of “inciting subversion of state power” afterCharter 08, a proposal for constitutional reform, was published.

A tweet from Akiranns is probably the best response to the Chinese government spokesperson’s statement:

Do you know who the previous Nobel Peace Prize winner to receive the award while in jail was? Carl von Ossietzky. And who was the ruler of his country? Hitler.

Netizens Arrested for Having Dinner Party

As if to assert Akiranns’ association of the two Nobel Peace Prize winners’ backgrounds, Chinese police officers have chosen to crack down on Chinese netizens’ spontaneous dinner celebrations of this memorable event in both Shanghai and Beijing. Hanlu1911 reports from one dinner on Twitter:

The Shanghai dinner and drinks party has been cancelled. Worried about Shi Feike and other Grass Mud Horses (netizens) who have been taken away by the police. Police officers brought along profile pictures from Sina.com microblog accounts. One young grass mud horse has already been identified this way. The police and undercovers are now wandering and checking around in the square.

Teng Biao has identified at least 8 Chinese netizens who have been taken away by police in Beijing’s Dongcheng:

Wang Lihong and Tiantian were just taken away by the Dongcheng district police to Jinshan police station. “A dozen of them cursed and kicked them away”. Ah Er, Xiaolu, and The Butcher have been taken to Heping police station. Xu Zhiyong, He Yang, @pengmomo and others were all taken away by police. The dinner party hasn’t even begun and they’ve already been arrested. Please pay attention to this.

Apart from the arrest action, the propaganda machine has continued to keep the news from spreading to the general public by imposing strict censorship on the Internet.

First of all, all special feature on the Nobel Prize from major portal websites have been taken down today, including the special feature from 163.com, Sohu.com, Tencent and Sina.com.

Third, soon after the announcement was made, twitterers, such as @haojinsong reported that mobile text messages with sensitive term “Liu Xiaobo” (åŠ‰æ›‰æ³¢) could not be sent out.

Despite all these censorship measures, words still spread around the Chinese internet. For example, on Sina’s microblog site, bloggers used pictures and English to avoid censorship. SongLingge#2 posted a picture of Liu Xiaobo and wrote:

Photo sharing: This guy looks more and more like the holy monk Gandhi, he is the Chinese holy monk who was just awarded the 2010 Nobel Peace Prize.

Fan Zhixing, a reporter urged his colleagues to record the history made today:

Reporter colleagues, your keyboards are under your control. How are you prepared to record today? When today is mentioned again in the future, we will be able to see the light and shadow reflecting each other.

Juding from hearsay, the guy who awarded the Peace Prize is Chinese, but he is not a party member! Because his political rights have been taken away. I have forgotten his name, don’t know how to write it.

Chongtou Yip retold the news with an allegory:

Once upon a time, there was a very violent and unreasonable father who beat and locked up his son in the room. However, at school all teachers and students praised the son. All the neighbors also praised the son. How can the father not see his own fault?

å»–å‰æ£  posted a poem and dedicated it to all political detainees:

To a detainee (116°46′E, 39°92′N): A crime without any reason cannot be sentenced. They want to delete you in every declaration. And turn you into Mr. non-existence. They extracted the air from Yongding river and froze it into white bones. Which were turned into meaningless iron bars on the window and ankle chains. They never imagined that you could pour ink onto the white bones. And paint the ashes of spring dream of the dreamer. By Oiwan Lam · Posted 8 October 2010   Originally published on Global Voices: http://globalvoicesonline.org/2010/10/08/china-nobel-peace-prize-winner-liu-xiaobo/

Filed under: World
Share Tweet Pin G Plus Email
previous article: Tinnitus
next article: Gujjars of J&K welcomed the step of UPA Govt. for considering the tribal issues on priority