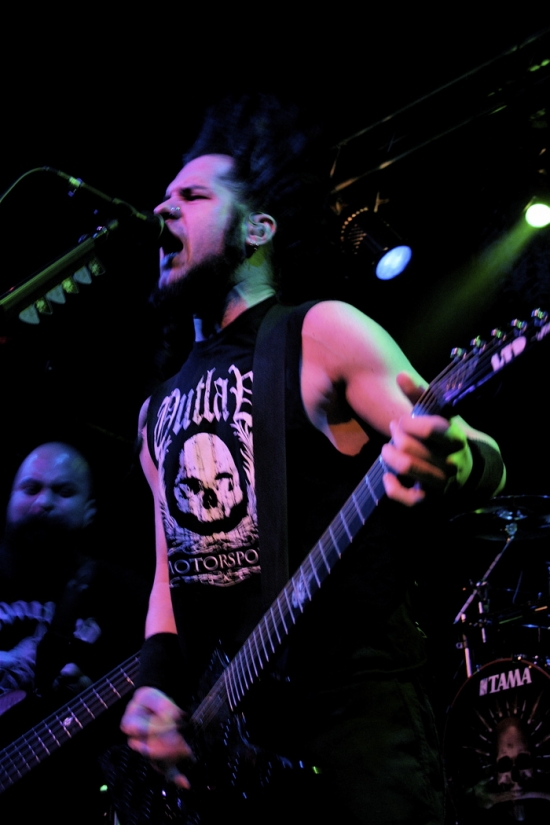 I woke up this morning with a collar bomb around my neck and rightfully so.

The detonation device? Static-X. They exploded on to the stage at Richards for the first date of the second part of their tour to support their outstanding new release; Cannibal (Warner).

Right off the bat, “The Wayner” & sauntered on stage with title the track and what a smack in the face. Two songs in another deathblow was delivered, as the inebriated crew started a mini-pit that resulted in a gent (wearing glasses) taking a "36 Crazyfist" shot to the eye. Glass in his cornea, blood spewing everywhere – the crowd went wild.

Yes. Static-X stormed the gates and all hell broke loose. Pulling tracks from four albums, the somewhat short set was the warm-up to their official Ozzfest inclusion, starting today. The extremely catchy “Behemoth” No Submission”(from the Saw III soundtrack”) and  latest single/video “Destroyer” were played album-version perfect. Almost too perfect (hmmm…) In a lascivious nutshell; nobody can touch Static-X without getting a shock(pun intended).

Tight, slick and as sharp as the towering Kid N’ Play hairstack of Wayne himself, the boys had  a no holds barred approach and the crowd went insane. Nice too see an abundance of cross-over cannibals arriving at a steady pace.

Goths, metalheads, gangstas, and hoodrats. Fashion took its place but the Mid-West assassins showed no mercy and in the end through the filth and the fury ….X certainly marked the spot.

Honourable mention to opening act Cyanotic for a great set, highlighting even more of the extremely(hidden) talent here in .