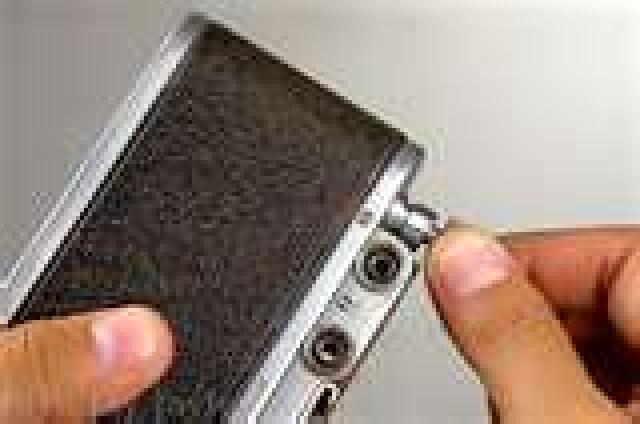 Choosing one film (say Kodacolor 100 or Fuji color 100) and using it for some months until you know the results it gives you, and understand just what it does and doesn’t do.

Film also comes in different length, 12, 24 or 36 exposures. The 36 exposures film costs less than three 12 exposure films, so it is worth while buying the 36 and waiting patiently to use the film and see the results.
a)      Open back of camera by pulling the re-wind knob
b)      When cassette is in place push knob down. Place film leader in take-up spool
c)      Advance film by pressing shutter release; make sure that the film is straight and is caught on the transport sprockets
d)     Close camera back. Press the shutter release to advance the film to 1 in the film counter window
e)      Set ISO film speed on the exposure meter dial
Loading the film
Loading a film into a 35 mm camera is not difficult, but it is wise to follow a routine.
1)      Read the instructions
2)      Make sure that there is no film in the camera before opening the back. To do this turns the re-wind knob a few times. If the camera is empty the re-wind knob will turn very easily.
3)      When outdoors, turn your back to the sun so that the loading of the film is not carried out in direct sunlight
4)      After loading, attach the end of the film’s cardboard box to the back of the camera. This shows the film’s ISO speed.
5)      Check that the film speed on the camera’s exposure meter dials correct
a)      End of film. Do not force wind –on lever
b)      Press and hold in the film release button on base of camera
c)      Pull op the handle on the-re wind knob. Gently re-wind the film until the handle turns easily
d)     Pull up the re-wind knob to open the camera back remove the film cassette
Unloading the film
There is a film counter on most cameras, but usually we realize we have come to the end of the film when the wind-on lever won’t wind on! Don’t force it, the film could tear and, while it is possible to save a torn film
1)      To wind the exposed film back into the light-tight cassette, first read your camera instructions. Usually there is a button on the base of the camera which should be pressed and held in while turning the re-wind lever on the top of the camera.
2)      When the film has been re-wind into the castle you will find that the re-wind lever turns freely and easily. Continue the re-winding for a few more turns to make sure that all the film is in the cassette.
3)      Open the back of the camera and remove the cassette.
If, by accident, you open the back of the camera before re-winding the whole film into the cassette, close it quickly and re- start the winding. The film exposed to light will be fogged, usually 3 or 4 frames will be lost, but the rest of the film should be all right.
Filed under: Media & Tech, Opinion
Share Tweet Pin G Plus Email
previous article: Make the Most of Your 2010 Tax Deductions
next article: APPROPRIATIONS BILL TO FUND FEDERAL GOVERNMENT AVAILABLE ON GPO’S FEDERAL DIGITAL SYSTEM