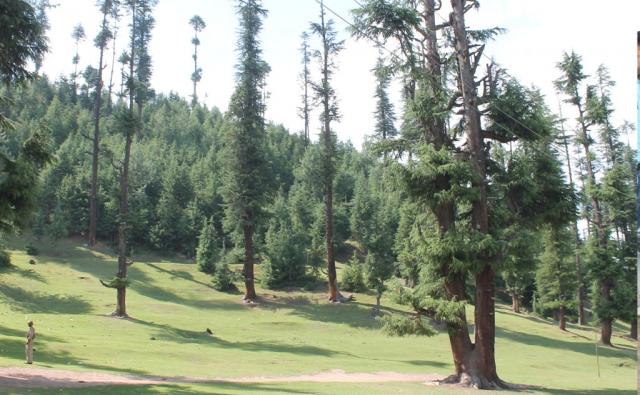 Srinagar, June 5  (Scoop News) –Minister for Tourism,  Ghulam Ahmad Mir, has said that Lolab valley is an ideal destination being explored fully to showcase it worldwide adding that series of attractions would also be created in virgin tourist destinations of Bangus and Drangyari to divert high-end tourists to these spots.

This was stated by the Minister today during his day long tour of Lolab and Reshwari during his interaction with the media and locals. He said Lolab Valley opened new vistas in Kashmir Tourism and concerted efforts are being put in to showcase it globally. He hoped in near future this Valley would become hub of tourism activities.

During the visit, the Minister took stock of the tourism activities being carried out in the district. He also reviewed physical and financial status of several projects being executed through Lolab-Bangus-Drangyari Tourism Development Authority (LBDDA) and Tourism Department in the District.

Mir said a promotional festival at Lolab, Bangus and Drangyari would be organized this year to attract the tourist to visit these spots. He directed the concerned to identify varied potential areas like Machil Pastures, adventure track routes and introduce them in the shape of packages outside the State.

Tourism Minister said spring and Herbal tourism of Lolab would be showcased, as the valley is covered with Majestic Mountains with number of fresh springs and variety of herbs and flowers. He said Lolab was also a favorite trekking route for foreign tourists a few decades ago. “One of the famous trekking route leads to Asia’s largest freshwater Lake Wullar. We can market these routes to attract tourists,” he said.
He said picnic tours by educational institutions would be also encouraged in the area. He said the land of love and beauty in north Kashmir is now all set to mesmerize visitors once again. He said the natural beauty of the area is expected to attract hordes of tourists and boost the local economy in coming days.

“The Lolab Valley popularly known as the land of love and beauty, is now once again in the limelight with the efforts by tourism department, a sought-after destination for travelers and a source of job opportunities for many Kashmiris”, Mir maintained.

"Saying peace and normalcy gaining ground in the Valley, people – especially the jobless educated youth of Lolab should opt for tourism avenues and for the purpose State government would encourage them by providing soft loans with subsides for setting up of ventures under the sector”, Minister said and added that a good number of youth would be imparted various types of trainings in hospitality and protocol sector this year also to provide quality services to the tourists. He said a Food craft Institute would also be established in the district and for the purpose a project of Rs 5 crore has been prioritized for Centre funding this fiscal.

Minister hoped that the tourism industry will generate sustainable incomes in the district, The Minister called upon the locals to come forward and take benefits of the incentives for converting their houses into guest houses and lodges for tourists. He said a promotional campaign is being also carried out in and outside the Country to woo the tourists to virgin destinations of the district.

He said that apart from Chandigam, Khumriyal and Darapora – places blessed with verdant forests and gushing streams, caves and old religious shrines – Kalaroose village in Lolab famous for its copper mines and carved rocks called Sat Burn (seven doors) other potential serene and adventure spots would also be brought on the tourism map.

"The shrines and caves are expected to attract tourists. We are ready to host the visitors after a long period of time," said Mir. "Fresh water springs, especially Kumarji Nag and Chandinag, are worth seeing."

Mr Mir  said to upgrade the tourist related infrastructure in the area Rs 1.50 crore are being expended this fiscal under State plan adding that during last fiscal over Rs 1.70 crore has been expended for the purpose. He said under Central financial assistance of Rs 5crore, the work on several tourist facilities is apace in Lolab Valley.

Chief Executive Officer Lolab-Bungus-Drangyari Development Authority, Muhammad Yasin dwelt about the measures taken by the authority for making these areas as places of tourist attraction.