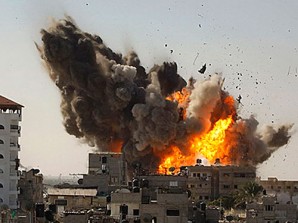 A building blows up in Libya during heavy bombardment by US warplanes in heavily populated civilian area in 2011.

“Long-term damage”, was an article I got published in 2011 in Kansas, that ran in the Hays Daily News.

It was recently forwarded to me by a friend at the Pentagon who found it in one of his files.

“The situation in Libya is very serious.The United States has made a choice to intervene in the affairs of another nation with the end goal of regime change.

U.S. B-2 stealth bombers dropped 45 2,000-pound bombs in Libya within the first 16 hours of the war, which is totally unprecedented.

These massive bombs contain depleted-uranium warheads. Particles less than 0.5 microns in diameter can be easily inhaled by people within a mile or so from the impact site and remain in the lungs for years. It can also cause birth defects and other horrible things.

Internalized DU can cause brain, liver and kidney malfunction and damage as it is extremely toxic to the human body.

DU lasts forever and has a half-life of 4.5 million years, according to the scientists I talked to, and will represent a sort of “lasting” American legacy in Libya that will affect the people well after Gadhafi is dead and gone.

I talked with one retired emergency management expert in Rush County who said DU warhead is like “a mini dirty bomb going off in your city.” And you must remember certain cities like Tripoli have been hit multiple times by U.S. bombs. So it is a “mega mess.”

DU is a waste product from the process of uranium enrichment. DU is used in such things as nuclear weapons, bombs and reactors.

I should say the use of DU in munitions is “controversial” because of questions about potential long-term health effects. Among doctors the actual acute and chronic toxicity of DU is also a medical controversy.

Sadly, there is no specific treaty ban on the use of DU projectiles — yet.

There is, however, a developing scientific debate and concern expressed regarding the impact of the use of such projectiles, and it is possible that in future there will be a consensus view in international legal circles that use of such projectiles violate general principles of the law applicable to use of weapons.

Bombing people with DU warheads is something that will come back to haunt us I’m afraid, and I am personally very disturbed by our use of DU munitions in this undeclared military action “to protect civilians,” which may have killed as many as 100 innocent people so far, according to al-Jazeera. Most of those are women and children by the way.

Such is the tragic and senseless nature of war.”