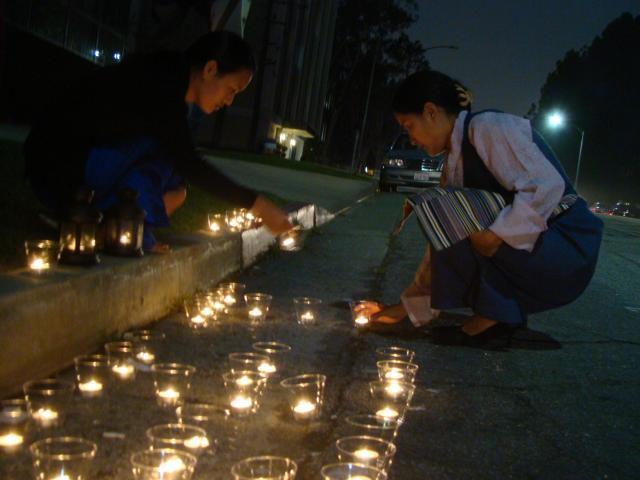 Los Angeles, California – October 19, 2011. All across the globe, Tibetans have jointly organized and united to perform peaceful demonstrations. This day was set as Tibetan Solidarity day and planned by the Tibetan Parliament-in-Exile and the Cabinet. In Southern California, Tibetans expressed their grave concern over the deteriorating situation inside Tibet and are saddened by the recent tragic acts of self-immolation in Tibet. At the Chinese Consulate in Los Angeles, the Tibetan Community has gathered to hold a candle light vigil and prayer session in Solidarity with Tibetan groups across the globe, to remember and honor all the recent selfless self-immolation sacrifices by Tibetans in Tibet.We condemn the People’s Republic of China (PRC) for its ongoing repressive policies against Tibetans, forcing some young Tibetans to take desperate measures, including setting their bodies on fire as an ultimate symbol of protest.

Since March 2011, nine young Tibetans set themselves on fire in anti-China protests. The cases of self-immolation include the following:
· Lobsang Phuntsok, 20, set himself on fire on March 16 to mark the March 2008 uprisings in Tibet. He died the following day due to the burns and beatings by the Chinese Security personnel. That resulted in more protests by the local population in support of his sacrifice.
· Tsewang Norbu, 29, a monk from Nyatso monastery, Kham Tawu, self-immolated and succumbed to his injuries on August 15, 2011.
· Lobsang Kalsang, 18. Lobsang Phuntsok’s younger brother, set himself aflame on September 26. He was hospitalized, but no information has been made available about his condition or whereabouts.
· Lobsang Konchok, 19, set himself on fire along with Lobsang Kalsang on the same day. His condition and whereabouts are also not known.
· Kelsang Wangchuk, 17, a novice monk, set himself on fire on October 3 and sustained serious head injuries during detention. His condition and whereabouts are also unknown.
· Khaying, 18, committed self-immolation on October 7. Khaying was taken to Bharkham hospital, where he succumbed to his injuries the next day. The authorities refused to hand over his body for fear of more public protests. His family received only his ashes and bones.
· Choephel, 19, set himself on fire along with Khaying on the same day and died on October 11.
· Norbu Damdul, 19, a former monk of Kirti Monastery set himself on fire in the Ngaba district market at 11.50 am on October 15, 2011. He was taken away by the police and his condition and whereabouts are still not known.
· Tenzin Wangmo, 20, a nun of Mame Dechen Chokorling nunnery (also known as Mame nunnery) and from Shakoma Village in Ngaba, lit herself at a crossroad near her nunnery around 1 pm on October 17, 2011. She is reported to have died at the scene.
All the victims of self-immolation have raised slogans demanding freedom for Tibet, freedom of religion, language, movement, speech, and an end to discrimination andthe return of His Holiness, the Dalai Lama to Tibet.
Filed under: Sports, World
Share Tweet Pin G Plus Email
previous article: Trunk or Treat So People Can Eat
next article: Silicon Valley Human Rights Conference all set to start