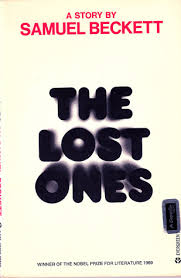 This story was begun in 1966, completed in 1970 – written in French, of course, then translated by the author into English. It’s essentially a prose exploration of a section of The Inferno: one of the particular torments of Hell. (Is it an actual story from the Inferno? I don’t know.) But it’s very mechanical – it sounds almost like a Sears catalog:

“The ladders. These are the only objects. They are single without exception and vary greatly in size. The shortest measure not less than six metres. Some are fitted with a sliding extension. They are propped against the wall without regard to harmony. Bolt upright on the top rung of the tallest the tallest climbers can touch the ceiling with their fingertips.”

The torments of this age are designed by engineers, Beckett seems to be implying. Is he referring to the Holocaust? Or something more general? The story is very helpless, hopeless, about being confined in a steel drum from which there is almost certainly no escape – but certain tantalizing possibilities. There are ladders, niches, and maybe somewhere an exit.

The book is completely “depressing” – though written in huge print like a children’s book – but something else is happening; it’s depressing without being SAD. Beckett was very smart, and realized there was only one way to write about contemporary life: through the lens of unmitigated horror.

“Somewhere in here is an affirmation,” I kept feeling, but I couldn’t quite find it. The fact is we cannot escape death; why pretend otherwise?