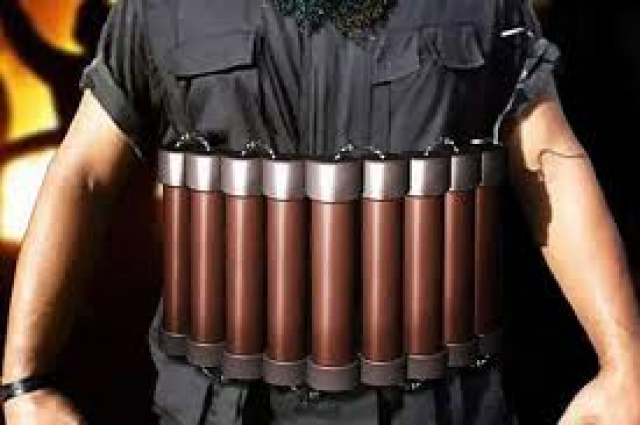 This is a very important lesson that especially Muslims, those going out a deliberately blowing up people with bombs strapped to themselves as martyrs for the cause desperately need to learn. I know of no God, that would order or condone such actions, let alone reward it, as the Muslim God is supposedly said to do.

"Ye have heard that it hath been said, Thou shalt love thy neighbor, and hate your enemy. But, I say unto you, Love your enemies, bless them that curse you, do good to them that hate you, and pray for them which despitefully use you, and persecute you."

This teaching and admonishment, is a part of Jesus best know talks and teachings, known as The Sermon On The Mount, that Jesus delivered to over 5,000 followers one day. Through this sermon comes one of the most profound commandments of Jesus that Jesus ever issues.

This command, to love even your enemy flew in the face of almost all of the peoples, Jews, Gentiles, Greeks, Syrians,Samaritans, and other nations, except for the Romans, for at this time in History, it was the Romans, that were hated with a passion.

In a later time, Jesus gets a perfect opportunity to demonstrate and display this new command. "Love even Your Enemy."

To get you to the story of Jesus actually showing love and compassion to an "Enemy", we first have to establish who. Who in Jesus time would be most feared and would be described as an "Enemy"?

Indeed Herod would be seen as an enemy of the Jews, But Herod’s power came from Rome and more specificallly from Pilate the Roman Governor of the time. That leaves only Rome and the Roman Officials, and Roman Soldiers.

So who could be the "Enemy" who would serve to illustrate this new Comm?andment, to love even your "Enemy"

We can find the answer to our question still in the Gospel of MATTHEW, specifically in MATTHEW: 8: 5-13:

Here Jesus through MATTHEW relates to us the story of a Roman, a Roman of Power, a man of official power, a "Roman Centurion". This Centurion was like a "Major" in the Roman Army in command of many Roman Soldiers.

This particular Centurion had probably witnessed and heard first hand of Jesus and Jesus miraculous ability to cure people, so when hearing that Jesus was nearing town, the Centurion seeks out Jesus for help, because the Centurion has a servant who is ill and dying, and the Centurion desires Jesus to heal the servant.

Jesus listens to the plea of the Centurion and offers to go to the Centurion’s home to effect the cure, but the Centurion, for what ever the reason says "No" and tells Jesus simply speak the words and I know my servant will be healed.

MATTHEW does not relate the fact that here was an enemy and that Jesus was demonstrating His new "Commandment" to love one’s enemy, But MATTHEW does make it perfectly clear that this was no ordinary person, But a Roman Centurion, know to be an enemy of the Jewish People of the day.

It is not a big leap to connect the scriptures in MATTHEW 5 and MATTHEW 8 to give witness to Jesus practicing what he taught, in this case "Showing Love to an Enemy".

Most see the story in MATTHEW: 8 as a story demonstrating the "Faith" of the Centurion in Jesus and they are correct to see this, but when we stop and think about the exact situation, Jesus manages to illustrate his Commandment to love one’s enemy, without actually pointing at it, drawing attention to it.

Come to think about it, isn’t this how the Holy Spirit works within our lives, drawing our attention to new lessons God desires us to learn.