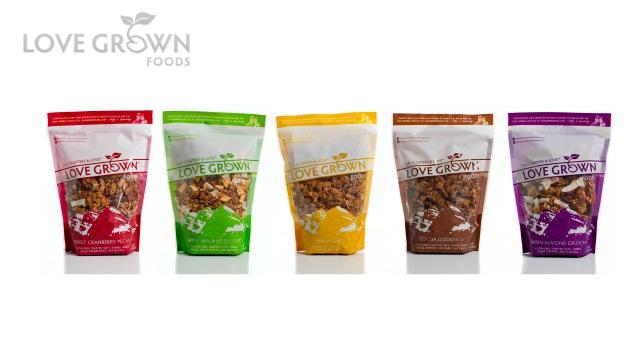 Love Grown Foods®, a leading natural food company, announced today it has appointed three new advisors as it continues to make a splash in the natural products industry. Love Grown Foods, which two young entrepreneurs founded in 2008, is now available in more than 2,100 stores throughout the United States and Canada and will reach 3,000 outlets by this summer.

Just in time to spread the LOVE at Booth #2296 at Natural Products Expo West, Love Grown Foods is thrilled to announce that esteemed executives Mo Siegel and Tom Spier have joined their recently assembled Board of Advisors along with industry veteran Joan Boykin, who has been named a strategic advisor.

Tom Spier is chief executive officer of EVOL Foods and founder of Spier Consumer Capital. Mr. Spier started his career working in finance, but after four years on Wall Street, he joined Bear Naked as COO. During that time, Bear Naked grew to become the largest natural granola company in the country. Mr. Spier successfully grew the company and positioned the organization for its sale to Kellogg’s. In his role as CEO of EVOL Foods, Mr. Spier has overseen the company’s maturation from a small regional brand with products in one category to a multi-category platform brand with broad national distribution. Today, EVOL Foods produces over 800,000 units per month and employs 65 people.

Joan Boykin, Love Grown Foods’ strategic advisor, is the executive director of The Organic Center. She has spent her career in the natural and organic products industry with Celestial Seasonings, where she spent more than 13 years as design/creative manager and director of marketing, new products, PR and retail; director of marketing and PR at Alfalfa’s Markets and Wild Oats Markets; and creative director and VP of new business at New Hope Natural Media. Boykin is a board member and advisor of Naturally Boulder, the Organic Voices/Just Label It Campaign, and the Deming Center for Entrepreneurship’s Organic Business Initiative.

“The teamwork and spirit at Love Grown Foods reminds me of the early days at Celestial Seasonings,” said Siegel. “Their youthful enthusiasm for producing and distributing healthy food is the kind of energy that builds great brands.”

“It is an honor to work with such influential people in our industry.  They each offer varied expertise and a deep well of knowledge to our company,” added Maddy D’Amato, co-founder and chief love officer. “Their counsel in properly approaching opportunities and challenges will result in continued strategic growth and sustained success for Love Grown Foods.”

During Natural Foods Expo West, which runs March 9-11, 2012, Love Grown Foods and its team of LOVE Ambassadors will be spreading the LOVE in Anaheim. Attendees and press are invited to stop by their booth to learn more about the company and taste their delicious, all-natural, Certified Gluten-Free products that are flying off retailers’ shelves.