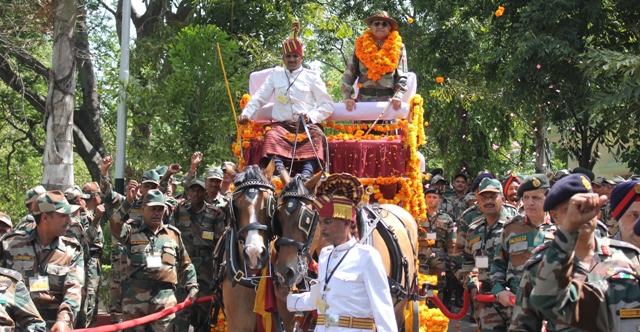 Udhampur, May 31, (Scoop News)_The Northern Command on Saturday bid a fond adieu to their GOC-in-C, Lt Gen Sanjiv Chachra on his retirement after an illustrious career of 40 years.

He had taken over command of the prestigious Dhruva Command at Udhampur on July one, last year.

As the Army Commander General Chachra consolidated the efforts to neutralize the terrorists and to wean away the youth from militancy.

He helped to channelize the energy of the youth for constructive activities like vocational training and sports. He contributed significantly towards the operational and logistic preparedness of the army to meet the challenges on our Northern and Western Borders.

Owing to his sustained synergized efforts with the Air Force, the Air Maintenance of our far flung posts and the sustenance capabilities along the Northern Borders has greatly improved.

Gen Chachra also undertook several projects to upgrade the facilities for the soldiers deployed in inhospitable weather and terrain conditions in the theatre.

In his farewell address the General paid tributes to the martyr’s who have laid down their lives in the service of the Nation and exhorted all ranks to continue to work with the same zeal and motivation to overcome the numerous challenges of combating terrorism, unabated proxy war, volatile Internal Security situation and external threats
along the Line of Control and Line of Actual Control.

He complimented all ranks for their immense professionalism, steadfastness, dedication and loyalty and being the best soldiers in the world. He also complimented and thanked the Civil Adminitration, CAPF & IAF for the excellent synergy with the army in pursuit ofmcommon goal of establishing “Peace & Tranquility’ in the state of Jammu and Kashmir.

As General Chachra hangs his uniform the future generations of army officers will strive to emulate him as a military leader owing to his sterling qualities, his firm resolve to follow the righteous path under all
circumstances, his sense of justice, and his statesman like qualities in dealing with the most contentious issues.

All officers, JCOs and men in Northern Command and the entire Indian Army will remember him fondly as they say goodbye to the illustrious General Officer.
MORE AT http://scoopnews.in/det.aspx?q=38204