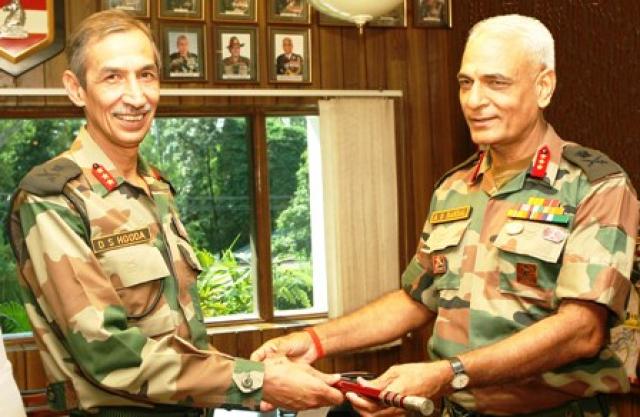 , , October 04 (Scoop News)- Lt Gen DS Hooda, took over as the 26th General Officer Commanding of the White Knight Corps. In a solemn ceremony held at the Corps Headquarters of today, Lt Gen AS Nandal, , handed over the baton to the Lt Gen Hooda.

Speaking on the occasion, Lt Gen Nandal complimented all ranks of the Corps for their unstinted support during his command.  The General also thanked the civil administration for the excellent synergy with the Armed Forces.  He also highlighted the important role played by the `Awaam’ in ensuring that terrorists were kept on the run by the security forces.

Lt Gen DS Hooda was commissioned in the 4th Gorkha Rifles.  He is a highly decorated Infantry officer, with vast experience of Counter Insurgency and Counter Terrorist Operations.  He has Commanded an Infantry Brigade in the High Altitude area and a Mountain Division in the North East region.  Lt Gen Hooda has held a number of important command, staff and instructional appointments, including that of the Chief Logistics Officer in the United Nations Peace Keeping Mission in and , and the Deputy Director General Military Operations in the Army Headquarters.