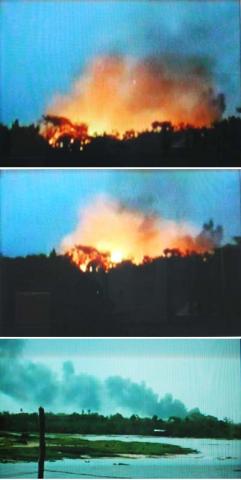 Sounds of Big Explosions heard from the No War Zone in Northern Sri Lanka since last evening where the remaining LTTE Rebels and trapped Civilians are locating Security Sources said.

Now the Rebels are restricted to 1 Kilo Meter by  200 Meter area in the No War Zone and remaining rebel leaders including their chief Prabhakaren are using 100 to 120 Member suicide Squad to prevent the escaping of the trapped civilians there.LTTE is planted  the explosive Substance White Phosphorus along with Bombs around the place where the civilians are staying aiming a large Massacre on running civilians according to the Security Forces.

Rebels may have try to put the blame on such a Massacre in the hands of the Sri Lankan Ground Forces Sources further added.

Meanwhile Three Female Suicide Bombers who are belongs to the Suicide Cadre in the area were surrendered to the Army yesterday.It has been revealed that they have No Food to eat from three days.