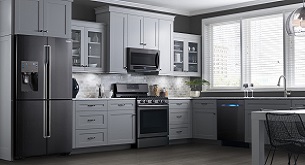 Bloomingdale’s – the famed upscale department store owned by Macy’s – has earned a reputation for selling designer clothing, handbags, and shoes. This American-only department store is widely recognized for its originality, innovation, and fashion leadership, according to Macy’s Inc. Until recently, they’ve never sold appliances and electronics in order to maintain their reputation. However, consumer demand for high-end appliances has become something they can’t ignore.

Through a partnership with LG Signature, Bloomingdale’s began selling luxury appliances in stores and online on November 19, 2018. New York’s 59th street flagship store was the first to get these luxury appliances. Dan Leppo, an executive vice president from Bloomingdale’s, told CNBC if they generate enough sales through the end of 2019, the company will begin selling appliances at other locations.

LuxuryDaily.com reports the LG Signature product line includes a $7,000 OLED television, refrigerators, washers and dryers, air purifiers, ranges, and dishwashers. These luxury appliances are more than sleek-looking toys. The Wi-Fi enabled washer can adjust the amount of detergent dispensed based on soil level, and the oven range is both gas and electric. They cost $3,200 and $3,600 respectively.

The company is hoping that with luxury appliances on the salesfloor, customers can get a taste of how they can enhance their lifestyle. A dual gas and electric stove is definitely one way to create a kitchen neighbors and friends will envy.

Wi-Fi enabled devices aren’t new. You’ll find at least one smart device in many American homes, not including a smartphone. Popular devices include smart speakers, smart assistants, Wi-Fi security systems, and even smart door locks. The smart home was once a vision of the future, and has now become a reality.

Inexpensive smart devices have gained popularity in recent years and are expected to continue to gain traction. In the luxury market, however, LG Signature is upping the ante.

Recently launched in 2016, LG Signature has partnered with interior designers, architects, and others to create smart luxury appliances that are also functional. Perhaps Bloomingdale’s has taken a hint from other luxury retailers like Selfridges and Harrods, who recently began selling high-end appliances and electronics in their stores.

The market for major appliances has shifted in the last decade. In 2016, J.C. Penney came out of a 33-year rest to sell major appliances to Millennial homebuyers. In March 2018, Sears filed for Chapter 11 bankruptcy, finalizing the end of a legend in home appliances.

So far, everyone seems to think this is a good move for Bloomingdale’s, including Neil Saunders, managing director or GlobalData Retail. “Other luxury departments stores like Harrods and Selfridges have successfully sold electronics for a long time, and it is an integral part of their offer,” he told RetailWire. “Moreover, Bloomingdale’s shoppers already buy electronics, so it makes sense for the retailer to try and get a slice of this spend.”

Although Bloomingdale’s is known for their luxury goods, they’re not the only stores selling luxury smart appliances. Home Depot, Lowe’s, Costco, and of course Amazon are going to be fierce competitors. Especially since spending on major consumer appliances in the U.S. is on the rise, increasing by 46% between 2012-2017. Euromonitor predicts the home appliance industry will reach more than $38 billion by 2020.

The only problem with Bloomingdale’s luxury appliances is a lack of brand choice for consumers. Right now, it’s LG or nothing. Consumers who want a different brand must shop somewhere else. Although, loyal patrons of Bloomingdale’s may choose to stick with LG just out of loyalty to the department store.

Filed under: Consumer
Share Tweet Pin G Plus Email
previous article: How Homeowners can Start Saving on Annual Costs Today
next article: Fermented or Pickled? That Is The Question