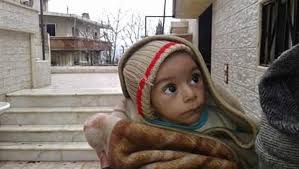 As the horrific war in Syria rages on in its fifth year, the world is shocked by images of innocent children suffering from hunger in the besieged cities of Madaya and Zabadani near Damascus. A question that deserves answering is who is Assad’s mentor in carrying out such inhumane measures and depriving innocent civilians, women and children of food? The response is simple: Iran.

Madaya and Zabadani locals are forced to eat animals, grass, tree leaves and even plastic bottles… 50,000 people in Zabadani have been suffering for several months now. Bashar Assad has deprived even children of milk. Electricity is cut off and locals are constantly under the threat of air raids.

A similar situation is seen in the city of Ta’izz in Yemen where Iran-backed Houthi militants are preventing the delivery of any oxygen capsules to hospitals. This shortage has forced all hospitals to shut down. Medical centers have also been shelled by the Houthis.

We should take a moment to think about the root cause of such inhumane behavior, and viciousness parallel to that of the Nazis? Turning hospitals into military bases, besieging people in cities, blocking water, food deliveries and medicine to innocent peoples, targeting refugee camps with artillery shells, bombs and rocket barrages, torturing inmates to death, piercing prisoners’ heads with electric drills, burning inmates, killing defenseless people execution style, raping prisoners and …

In this search we stumble upon the term “religious fascism”. The fascists of Hitler burned people in Auschwitz after forcing them to starve for years. They were then killed in gas chambers and burned to Ashes.

In our day and age, long before the barbarism of Bashar Assad in Syria, or the atrocities in Iraq and Yemen, the regime in Iran was the founder and inventor of all these vicious actions in its dungeons such as Tehran’s notorious Evin Prison and Kahrizak.

Dr. Ahmed Shaheed, UN Special Rapporteur on Human Rights in Iran reported in March 2012 citing sources inside Iran that political prisoners continue to be deprived of adequate access to medical care, leading to the deaths of at least two inmates, including Mansour Radpour.

Mr. Mohsen Dogmechi, a renowned bazaar merchant in Tehran, suffered from advanced cancer yet the Iranian regime deprived him of chemotherapy. He perished in prison.

The further we go back in time we find more such examples in Iran. The infamous chain murders in the 1990s, the massacre of over 30,000 political prisoners in the summer of 1988. The root of all this is none other than Khomeini, the founder of this notorious regime and the mentor of all the ruling mullahs in Iran today.

“We want a caliph that will amputate hands and stone people…” he was known to say. Looking into Iran’s track record we find more horrific examples of these vicious practices.

Political prisoner Mr. Ali Moezi is currently suffering from prostate cancer, kidney problems and a number of illnesses. He was literally arrested in a hospital while undergoing therapy and authorities have to this day deprived him of any serious medical care.

Mr. Mehdi Fat’hi, an Iranian refugee in Iraq, lost his life after being deprived of medical care by the government of former Iraqi prime minister Nouri al-Maliki, a known puppet of Tehran.

A medical siege imposed by the Iraqi government against Iranian refugees in Iraq has taken the lives of 26 innocent people. A horrific attack these Iranian refugees in September 2013 left 52 killed execution style, hands tied and bullets placed in their heads. Depriving these refugees of any food after targeting their camp near Baghdad with 80 enhanced 122-milimter rockets. This horrific attack left 24 refugees killed.

These are crimes committed by the Iranian regime, the first ‘caliphate’ in the Middle East, long before ISIS ever came to exist.

Vicious attacks continue as we speak. Recently, Syrian civilians including women and children were killed and others were injured in Russian airstrikes bombing the towns of Zamalka, Aze, Deir al-Asafir in East Ghouta located near Damascus.

We must remember the thousands of innocent people of Syria, Iraq and … who rushed to the seas seeking refuge in other countries, only to witness their lifeless bodies washed ashore.

Crimes will continue. Yet we have come to recognize the root cause being the regime sitting on the throne in Iran. They are behind all the proxy wars and catastrophes in Syria, Iraq, Yemen and Lebanon. A firm policy is needed to bring all this to an end.

Heshmat Alavi is a political activist and supporter for regime change in Iran. He writes on Iran and the Middle East.