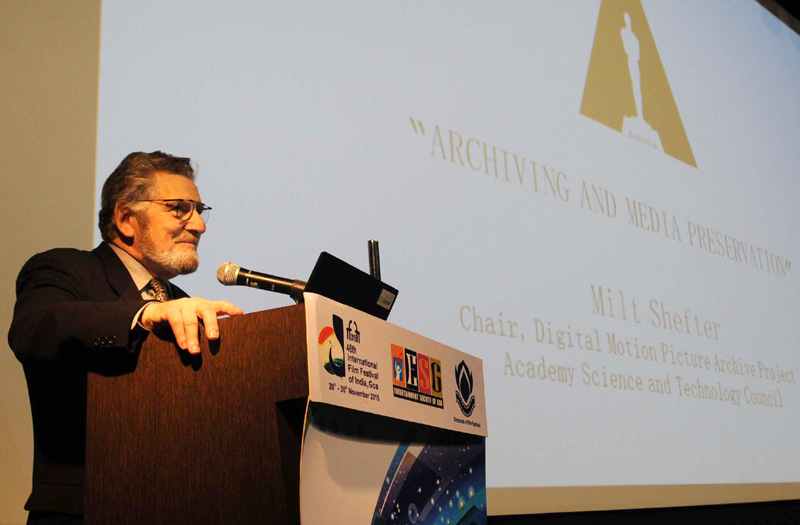 Master class by Mr. Milt Shefter on Film Archive and preservation, at the 46th International Film Festival of India (IFFI-2015), in Panaji, Goa on November 23, 2015.

Panaji (PIB-GR-TYP-BIN): Restoration and preservation of digital records is sixteen times more expensive than that of celluloid films according to Milton Shefter, an eminent member of the Academy of Motion Picture Arts & Sciences. “The two methods of capturing and storing information have both advantages and disadvantages but I personally prefer celluloid tapes as keeping and maintaining digital records are laborious and cost intensive. With temperature and humidity regulation, celluloid tapes can be preserved for centuries but same does not hold for digital films,” disclosed Milton Shefter in a media interaction.

Mr. Milton lauded the efforts of the Government in coming out with a project like National Film Heritage Mission and appreciated its commitment to preserve classic films for future generation.

Responding to a question, Shefter highlighted the need for innovation in finding a ‘durable medium’ in storing and preserving film records. Regarding the cataloguing of archival records, he said that there are standard practices and systems in place though the process is challenging.

Milton shared his knowledge on film preservation and restoration, in the ‘Master class’ Session at 46th IFFI on November 23. He is known for the two reports he co-authored, ‘The Digital Dilemma” which has been the subject of numerous international press reports and discourses on film preservation.

Milton R. Shefter is the President of Miljoy Entertainment Inc, a Project Management Consultancy specializing in media asset preservation. He worked on major preservation projects with Hollywood Studios including the Paramount Pictures library/archival project to catalogue, inspect, repair and build archives in several locations to house their moving image and recorded sound collection.

He received the Society’s (Society Of Motion Picture And Television Engineers) Archival medal for his work as a leader in media preservation. He is an active member of the Academy of Motion Picture Arts and Science and Technology Council. He chairs the American Society of Cinematographers annual outstanding Achievement Awards and received that organization’s Outstanding Service Award.