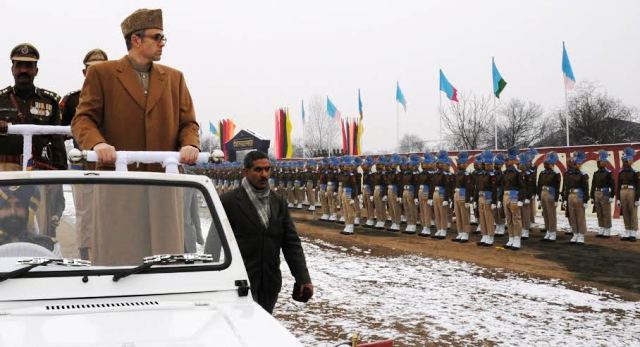 Humhama(Budgam, December 22, (Scoop News)- Chief Minister, Omar Abdullah Sunday highlighted the role of persons in uniform to safeguard the life and property of the citizens and combat internal and external threats to the Country. He said the sacrifices made by the forces including CRPF and Jammu and Kashmir Police to safeguard the people and help the State to maintain law and order and restore peace are of highest degree depicting the bravery and commitment of personnel of all ranks.
Addressing the passing out parade of CRPF candidates at Humhama Training Centre, the Chief Minister advised them to uphold the principles of protecting human rights and extending best behaviour towards people while dealing with various matters.
“Your behaviour towards people is of paramount importance and you should always make the best attitude and positive behaviour towards people the benchmark of your duty”, he said and expressed the hope that the passing out personnel will render best service to the people and the Country and prove to be the best friends of the masses wherever they serve in the Country.
The Chief Minister said that Para-military forces like CRPF and personnel of Police have to deal with challenging situations which are particularly of complex nature in a State like Jammu and Kashmir where combating militancy and helping to control law and order situations have to be dealt simultaneously. He said every care needs to be taken in this kind of situation to deal with people and help control law and order situations.
The Chief Minister congratulated the passing out candidates and attributed the snowfall at the time of parade as a good omen for them to begin a stupendous career in their life. He wished them success and well-being and hoped that they will serve best to the people of the Country.
“Your good work often goes unnoticed while any flaw in your service rendering raises fingers pointing towards you, as such, you have to concentrate on rendering flawless and careful duty with your best capacity and highest degree of sincerity for which you have taken the oath”, the Chief Minister added and highlighted the praiseworthy service of CRPF delivered by it throughout the Country and in the State.
The CRPF Training Centre came into being in 1990 at Humhama and served as an important training centre throughout the year even during the harsh winters in Kashmir. This centre is the only training centre in North India and contributes a lot in imparting modern training to the CRPF which plays the role of striking reserve to assist the States to maintain the law and order and in counter insurgency operations.
CRPF has played an important role in Jammu and Kashmir State towards maintaining security and assisting the State Police and local administration to tackle law and order issues. It also played crucial role in saving and protecting human lives during natural calamities like 2005 earthquake.
On today’s parade 335 trained candidates passed out and received certificates. The parade was led by Parade Commander Pardeep Ranawat, Sub Inspector Mohammad Azam was Parade-2 I/C, the National Flag bearer was Assistant Sub Inspector Sat Pal Singh and CRPF Colour Bearer Sub Inspector Sukhdeep Singh while Flag Escort Commander was Kulvinder Singh.
The Chief Minister took salute on the parade and presented awards of excellence to the best indoor cadet bagged by Kapil Anand, best indoor award won by Subash Chander, best shooter award received by Ajmeri Ahmad and all round best award won by Sutendra Kumar.
Of the passing out candidates 66 were from Utter Pradesh, 34 from Rajasthan, 16 from Jarkhand, 2 from Andhra Pradesh, 75 from Bihar, 5 from Punjab, 6 from Odisha, 2 from Karnataka, 3 from Himachal Pradesh, 4 from Gujarat, 26 from Haryana, 30 from Assam, 9 from Tamil Nadu, 3 from Madhya Pradesh, 11 from Maharashtra, 10 from West Bengal, 3 from Tripura, 3 from Kerala and 27 from Jammu and Kashmir.
The candidates were also administered oath. The Principal of RTC Srinagar also spoke on the occasion.