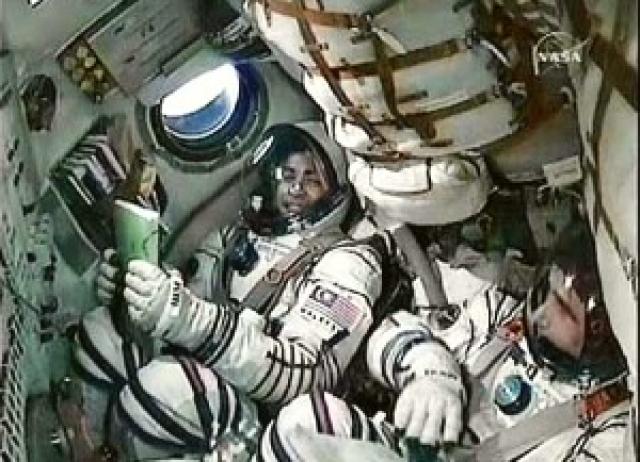 SARAWAK/Malaysia: All eyes were fixed on Malaysia’s first cosmonaut Dr. Sheik Muszaphar Shukor created history when he blasted off into outer space from Baikonur, Kazakhstan on Wednesday evening at 7.21pm local time.

In the middle of Kuala Lumpur city-square a giant television was put up for people to watch, while in several centers huge TV screens were also made available and the two top leaders were among them. American NASA former astronaut Robert L. Gibson was especially invited by the Malaysian government to brief two leaders on the flight.

Describing the momentous event as an exciting time, the Prime Minister Abdullah said the country would send the second cosmonaut the 27 year-old Capt. Dr. Faiz Khaleed some later. The Deputy Prime Minister Najib described it as defining moment in Malaysia’s history in pursuing space undertaking.

The flight in space is still travelling in space orbiting the globe as it is catching up with the ISS or International Space Station. It is expected to catch up and dock on the ISS in at least 32 more hours. They will be expected to be space and ISS for 10 days.

Dr. Sheik, now known as ‘angkasawan’ (for astronaut in Malay language) in Malaysia, has also become an immediate hero and a household name in the country. He is carrying out experiments on cells, microbes and the crystallization of proteins in weightless environment.

The inaugural flight for Malaysia has also fulfilled its long-term dream sending its citizen into space. The country now makes up of the 39 countries in the world, which have sent their citizens into space for scientific and peaceful purposes.

Malaysia’s Minister of Science, Technology and Innovation, Dr. Jamaludin Jarjis was in Baikonur to witness the event. He was quoted as saying that sending a Malaysian into space was not merely for marking the 50 years of independence, but rather a shift and advantage to be a more successful nation.

"We want to awe and inspire, and to spur Malaysians to attain greater success by embracing science and technology," he said.

Coincidentally, Russia is marking its 50 years of space exploration. The first ever satellite, Sputnik, was launched from the very same Baikonur Cosmodrome on October 4, 1957.

Dr. Sheik Shukor’s space adventure has been made possible by Malaysia’s Angkasawan Program to send its first citizen into space. The program was conceived in 2003 when Russia agreed to send a Malaysian to the ISS as part of the Malaysia’s $1billion purchase of 18 Russian-made Shukoi-30MKM fighter jets. The Russina government is bearing the cost of the program.

Dr. Shukor is one of the two candidates chosen from 11,267 applicants in one selection process, which started in 2003 and ended in September 2003.