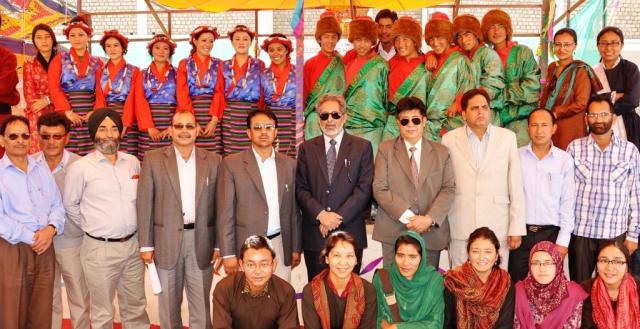 Leh,September 15 (Scoop News)-    On the second day  of his visit to Leh district, the Minister for Higher Education, Labour and Employment,  Abdul Gani Malik, today chaired an awareness programme on VSA Seed Capital Fund for different welfare schemes being implemented by the J&K Building and other Construction Workers Welfare Board at Eliezer Joldan Memorial College Leh.

Expressing happiness over the satisfactory role played by higher education as indicated by latest figure of human resource index of Leh distt and maximum post of officers held by locals besides the fact that the district comprises largely of remote and far flung hamlets.  The Minister urged upon the Principal and Lecturers of Leh College to formulate a road map for the college keeping in mind the future perspective of Ladakh for the coming generations. He laid stress on improving the standards of education and prepares the students to meet the future challenges and compete in different fields.

Responding to the problems and demands of the College, the minister announced to start Geography, Geology and Computer Application subjects from next academic session in the college as these subjects are relevant considering the geographical and geological conditions of the region. The scope for world class research opportunities in Ladakh is wide and all out efforts will be made to promote the same. To fill up the vacant posts of lecturers and other staff including Commerce and Psychology lecturers on contractual basis, the minister assured to decentralize the power of recruitment from to district administration, Leh for engagement of lecturers on contractual basis.

He also announced Rs.30 lakh for construction of Multipurpose Hall for the College  and assured to give due consideration to the other demands of the College and to establish a branch office of Kashmir University in Leh College in shortest possible time to facilitate the local students in filling up the forms locally.

Expressing gratitude on behalf of LAHDC to the Minister, the Executive Councilor for Higher Education, LAHDC, Leh Gh. Abass Abadi said that he is the only Higher Education Minister to visit Ladkah which shows his concern and determination for Leh Distt. Abadi put forth various important demands of the including creation of posts of lectures and other non teaching staffs. He also requested the Minister to make functional the already sanctioned college at Nurba at the earliest possible so that students of Nurba region could avail the benefits of higher education.

Principal, Eliezer Joldan Memorial College Leh also spoke on the occasion and put forth the demand of college in detail.

A colorful cultural programme was also presented by the students of the college on the occasion which was highly appreciated by the audience.