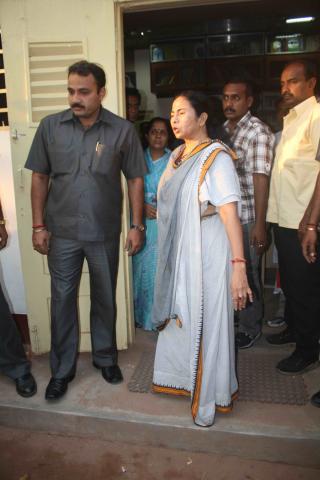 Opposition Parties in Bengal like TMC improved their performances significantly.Recent poll debacle both in the local and general elections worried the left leadership a lot and they agree that it’s time to change. On several occasions,she was physically assaulted by ruling communist party cadres.On 16 August,1990,Mamata was physically assaulted by Lalo Alam,a goon backed by CPI(M).13 congress supporters were gun down by police on 21 June,1993 when she laid a seize in front of Writers Building,the power center of Bengal.She and her party organized in numerous protests,rallies,sit-in-demonstration against Marxist regime.A fierce foe of Marxists government in Bengal,Mamata Banarjee,the temperamental supremo of the main opposition party  ,Mamata was elected as a member of parliament for the 8th Loksabha (House of the people) from Jadavpur constituency defeating the veteran Communist leader Somnath Chatterjee by 48,000 votes and hold many portfolios as a Minister for several times in 1984. Now she is the railway minster of the second UPA government.Due to major differences with senior leaders like SoumenMitra,she founded All India Trinamool Congress after breaking away from the Congress in 1997 and became a part of right wing BJP led National Democratic Alliance(NDA)..In 2009 general election,Mamata formed a formidable alliance with the Congress(her parent party) to teach Marxist a lesson.

Mamata went into indefinite hunger strike for 25 days long in protest against the forcible land acquisition of farmland in Singur,40 km away from Calcutta for the Tata small car project.Mamata also took similar stand against the decision of the state government to set up a chemical hub now shelved,in Nandigram In east Midnapore District.A new Mamata had emerged as farmers leaders to impress the electorate in the local village body(panchyat) election. The results of local body elections once again proved that Buddhadeb Bhattacharjee,a poet and playwright led Left Front government lost the popular mandate.In Singur and Nandigram TMC whcih opposed land acqusation by the state government for industrial development.Singur,Nandigram issue gave Trinamool Congress a new lease of life.Mamata’s popularity also reach an all time high.Mamata’s All India Trinamool Congress with seven MP’s was a part of the Bharatiya Janata Party(BJP) led coalition government National Democratic Alliance(NDA) which ruled the country from 1998 to 2004.After 2004 Parliamentary election Trinamool Congress tally reduced to just only one MP ( Mamata herself).Now TMC is an important ally of INC led United Progressive Alliance (UPA) with 19 MPs.