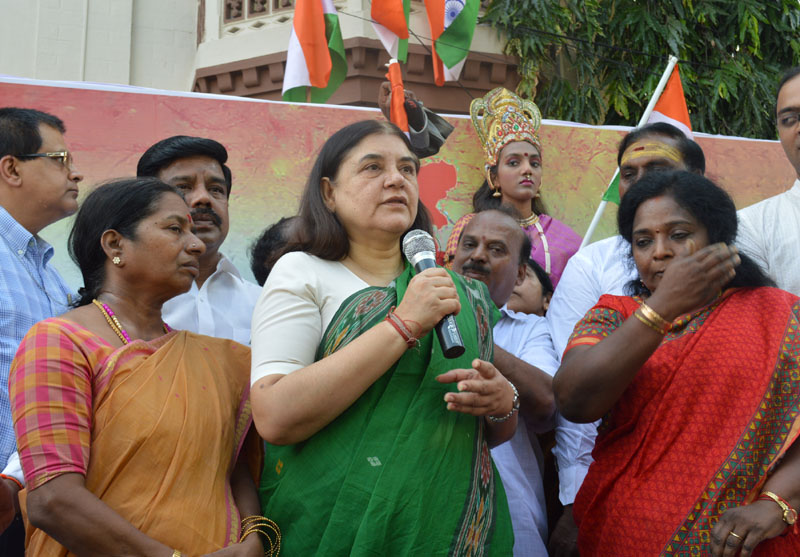 The Union Minister for Women and Child Development, Mrs. Maneka Sanjay Gandhi addressing the gathering after flagging off a motor bike rally as part of ‘Azadi 70 Yaad Karo Kurbani’, in Chennai on August 16, 2016.

Chennai (PIB-GR-TYP-BIN): The Minister of Women and Child Development, Mrs. Maneka Sanjay Gandhi held Regional consultations with Civil Society Organizations on the draft ‘Trafficking of Persons Bill, 2016’ in Chennai on Aug 16. 21 NGOs and the Government of Tamil Nadu participated in the fruitful consultations. Secretary, WCD Ministry, Ms. Leena Nair was also present during the consultation process. The NGOs came forward with important suggestions for the Bill. They suggested that the timelines for repatriation of trafficked victims should be included in the Act itself. Similarly, begging is an important area where trafficking is rampant and should be taken up seriously under the Act.

Earlier, Mrs. Maneka Sanjay Gandhi participated at a function of project Abhayam. Abhayam is an initiative of the NGO Dayaa Foundation established by Mrs. Latha Rajinikanth for safety, rescue and rehabilitation of children in the city of Chennai. Addressing on the occasion, the Minister said that the WCD Ministry will be starting a new initiative for providing birth certificates and AADHAR Cards to street children. This landmark initiative will help street children obtain an identity for their future use to move ahead in life.

The Minister appreciated the recently launched initiative of Dayaa Foundation to establish a Citizen Council for child safety, which will be the first of its kind initiative of bringing citizens together for protecting children. It is a very good initiative and I would like to see it extended to other states also, the Minister said. Mrs. Maneka Sanjay Gandhi also spoke about the measures being taken by Government for safety, protection and care of children including the children’s helpline i.e. Childline, initiative with railways on missing children, the new Juvenile Justice Act, New Foster Care programme and complete reform of Adoption System.