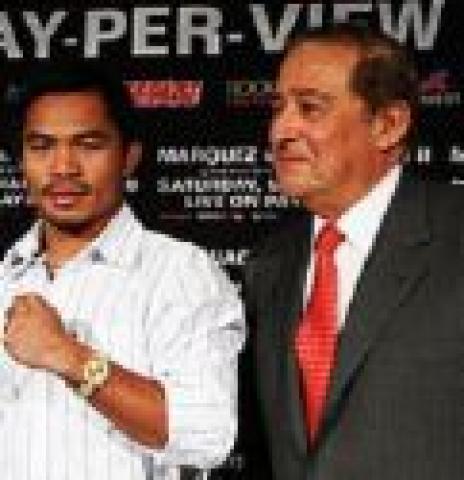 Although Pacquiao has thousands of fans in United Kingdom because of the great number of Filipinos living and working in England, he is expected to behave like an ordinary visitor respectful of the host country’s culture and traditions. Pacquiao expects some harsh and uncalled for comments from die-hard Hatton fans but he is expected to address them with words that are contained in his promotional script as prepared by the fighters promotional handlers. After all, the visit is being made in order to create awareness for the important event.

While in England, Pacquiao is expected to meet with the large Filipino community in UK most likely to be hosted by the Philippine embassy in London. For three days, he will try to woe the undecided boxing fans in UK to watch the fight in Las Vegas or on pay per view right in the comfort of their homes.

Manny Pacquiao is expected to appear as guest on various TV and sports shows that are designed to promote the Pacquiao-Hatton match. Online and print media reporters are likewise expected to have an audience with Manny Pacquiao for a deeper insight into the most talked-about boxing event of the year.

Pacquiao is expected to make connection with Freddie Roach right after the promotional tour. Roach previously intimated that he needs at least two months to put Pacquiao back in shape for the most exciting boxing fight of the year. Roach said that Pacquiao is the most disciplined boxer he ever handled and he is not worried about the limited time he is given to prepare Pacquiao of the fight with Hatton.

Hatton’s trainer and Coach Floyd Mayweather, Sr., said that Hatton has started preparing for the fight right after the signing of the fight contract with Pacquiao. He said he will introduce new techniques to address Pacquiao’s signature fighting style. But the Pacquiao camp belittled Mayweather.s plan saying that ‘you cannot change Hatton style instantly, he will always revert to his original style where he is comfortable. Changes, they said, cannot be done in two months; it takes years of constant and continuous training and practice to develop and make it effective.

Roach was able to make notable improvements on Pacquiao’s fighting styles and skill. One of his major accomplishments is Pacquiao’s new-found strength of his right hand’s punching power. Overall, Pacquiao has been transformed from a careless ill-trained fighter to one who is disciplined, powerful and the most skillful boxer that he is today.