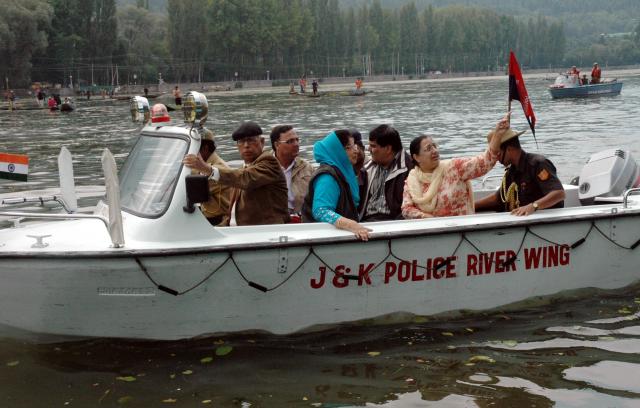 The Governor,of Jammu ans Kashmir,  N N Vohra on Saturday called for round the year manual cleaning operations in the Dal Lake, with focused attention on removing all unauthorized structures along the peripheries of the water-body.
During his extensive round of the lake, along with senior officers this morning, the Governor reviewed the pace of the Dal Conservation Project and directed the concerned functionaries to expedite the procurement of de-weeding machines, costing Rs 30 crores, for augmenting the cleaning operations.
The Lake Conservation Project is being supported by the Union Ministry of Environment & Forests with a financial outlay of about Rs 300 crores. The project envisages, inter alia, sewerage treatment, hydraulic and restoration works, development and management of the catchments areas, institutional strengthening and infrastructure development. The de-weeding, de-siltation and pollution control in the lake forms important ingredient of the project under the National Lakes Conservation Programme. So far, Rs 118 crores has been spent on the project.
Vohra was informed that three Sewage Treatment Plants have been established at Hazratbal, Habbak and Laam besides the construction of the settling basins for stopping silt at the catchments areas. The drudging operations and the shore line catchments area development is also progressing.
Taken up in 2005, the Dal Development and Conservation Project is slated to be completed by 2010.
Being seriously concerned over the deteriorating condition of the Dal Lake, the Governor called for launching a mass movement along side the governmental measures for conserving this glorious heritage of Kashmir. He observed that the large scale civil society involvement and a sustained campaign for enhancing awareness were imperative for saving the Dal from extinction. He stressed the need for taking social measures for conserving all the water bodies in a big way and observed that the Non Governmental Organisations, students, environmentalists and the people belonging to different shades of life could play their useful role in this regard. "The Dal Lake has to be saved at all costs, as else this glorious inheritance from the ancestors would become no more than a memory for the coming generations", he maintained.
The Governor also visited the Sewage Treatment Plant (STP) at Laam and was briefed about the process, technology and operations of the existing plants. He directed that the proposed STPs at Nallah Amir Khan and Brari Nambal be installed immediately so as to protect the lake from further inflow of household sewerage from the peripheral areas of the Lake.
Later, Vohra visited Rakh-e-Arth in the Budgam district and reviewed the progress on the development of 7500 kanals of land acquired for the resettlement of the Dal Dwellers. The rehabilitation of these people is being funded by the Centre and adequate funds have been made available for the purpose.
Vohra emphasized the need for a time bound proper re-location and rehabilitation of the Dal dwellers. He suggested engagement of a reputed consultancy for advising on the development of a model colony, having modern facilities, like proper drainage system, electricity, drinking water, schools, health care centres, shopping arcades etc. While planning these colonies, maintenance of the natural contours and flows must be ensured, he stressed. The Governor was informed that another 1000 kanals of land have been acquired at Chandpora in Harwan for resettlement of the Dal dwellers.
Principal Secretary to Governor, B B Vyas, Commissioner/Secretary, Housing & Urban Development, Naseema Lankar, Inspector General of Police, Kashmir, S M Sahai, and the Vice Chairman, Lakes and Waterways Development Authority, Irfan Yasin, accompanied the Governor.