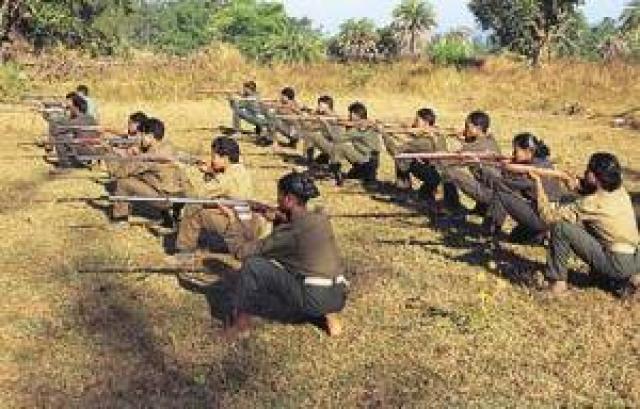 Naxals or Maoists regularly organize people’s court in their strongholds in India in front of local people.They conduct ‘trial’ of ‘corrupted’ politicians or party sympathizers.If they found ‘guilty’,they are thrashed for ‘corruption’.In these people’s courts (Jan Adalat), first the ‘accused’ person is summoned to the ‘court’,if he refuses to comply then he is killed by Maoists.In West Bengal,Maoists regularly tried leaders and workers of political parties in people’s court for corruptions like misappropriation of funds from government run welfare schemes or local bodies-if they held guilty,they(political leaders or party workers)are forced to sign a piece of paper,severing all links to the party.if they ‘ignore’ their ‘diktat’,they face brutal consequences.

Local leaders of the ruling Communist Party of India (Marxist) are killed by the Maoists in Lalgarh region of West Midnapore District.Political leaders and supporters of other parties  are also the target of  CPI (Maoist) cadres.Meanwhile,police and para-military forces also intensified their operation against Maoists.On March 2,Venkateswar Reddy alias Telugu Dipak (40), a top leader of the Communist party of India (Maoist) and suspected mastermind behind the February 15 attack on Eastern Frontier Rifles (EFR) personnel in Silda in West Midnapore District was arrested by the Police from Sarshuna on the southern fringes of Calcutta, the capital of West Bengal.On June 4,Khagen Mahato,a supporter of the Maoist backed People’s Committee against Police Atrocities (PCPA) was arrested by the sleuths from Kharagpur in West Midnapore District. He is the owner of a pickup van allegedly used to ferry men who sabotaged the railway tracks leading to the May 28 Jnaneswari Express derailment in which 148 persons were killed.

Filed under: Politics, World
Share Tweet Pin G Plus Email
previous article: Remembering the Birdman of India
next article: Kashmir is not the personal property of Gillani : Leela Karan