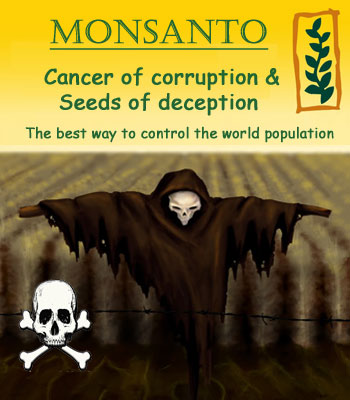 – and just walk away from the chemical mass-murderers

Today, 23rd May 2015, the global movement defending healthy food is demonstrating again which dangers the agrochemical complex has brought to all people on Earth.

One of the top ugly heads of the monstrous agrochemical industries is MONSANTO, a multinational corporation that brought globally untold suffering, ranging from mass-suicides in India among impoverished cotton-farmers to dying peasants in Columbia and Brazil.

The magnitude of cancer patients has yet to be revealed worldwide, since only recently the WHO finally had to give in to indisputable scientific evidence and had to declare Monsanto’s herbicide product “Round-up” with its component glyphosate the second most dangerous substance to cause cancer. This specifically among the bold and beautiful, who are fond of playing golf on silent greens treated with Monsanto’s deadly herbicide-cocktail and the many millions, who suffer from glyphosate induced health effects, because they have to consume cereal flour from grains, which were killed off to be harvest-ready, dry and quickly milled.

Monsanto is also the main force among the chemical corporations driving the engineering of genes in all lifeforms they can lay their purely profit-oriented hands on, thereby destroying hundreds of years of work in natural selective breeding of animals and plants, which helped many human cultures to strive. Monsanto’s machinations to produce genetically modified organisms (GMOs) and especially genetically engineered (GE) crops with genetic traits from viral and bacterial genomes are truly outrageous, especially because they contaminate the natural gene-stock developed over millions of years by nature.
Research from Canada showed that BT toxins are showing up in pregnant women, and low and behold – they are killing human embryo cells

Monsanto is clearly also part of the military-industrial complex, which operates in cohorts with the neo-colonial conquest of countries that were intentionally placed into distress like Iraq, where the conquering USA all of a sudden imposed new laws making it illegal for traditional farmers to use their own grain- and vegetable-seed.

Monsanto’s track record has been scrutinized ever since it aided USAmerican warfare during the Vietnam war. Agent Orange was manufactured for the US Department of Defense primarily by the Monsanto Corporation, the use of which is estimated to have killed and maimed around 400,000 while causing birth defects for 500,000 children.

But Monsanto just continues as if nothing happened. Why Monsanto was not stopped earlier is clear: Monsanto itself is like a cancer, has permeated all the top-echelons including the churches with its corrupt and corrupting practices and very rarely their mercenaries have gone to jail.

If Genetically Engineered/Modified Organisms (GE/GMOs) didn’t increase pesticide use, and help them monopolize seed distribution, Monsanto and other chemical/biotech companies like Dow, Dupont, Bayer and Syngenta, wouldn’t be pushing them. If the biotech industry were so interested in “doing good” on our planet, why are all their operatives engaged in mafia-style tactics that include death threats, intimidation and character assassination attempts?

Hundreds of thousands of demonstrators in 428 cities of the free world are therefore expected to turn out this weekend to protest agribusiness moloch Monsanto. The third annual ‘March Against Monsanto’ seeks to also highlight the company’s part in the attempt to control of the food supply globally.

Why not in all countries the world over? Well, this has to do with the fact that especially in countries with more or less oppressive regimes the Monsanto bosses sit directly at the helm of power and actually can launch repressive action of so-called security forces.

Africa walks away from Monsanto

In countries like Kenya and others in East-Africa, or in Mali and others in West-Africa the people and activists therefore have substituted the “March against Monsanto” with a week of awareness creation to “WALK AWAY FROM MONSANTO“. A week of intense questioning, a month of further investigations and a year of concise action to walk the talk and walk away from harm.

They will inform people and those politicians, who are not yet corrupted by the chemical and seed corporation Monsanto about key issues:

Youth to the Front

Part of the ongoing Africa-wide campaign is also to encourage young people to question their parents, peers and institutions of learning and to thoroughly investigate their own environment:

– are just a few of the many questions those in charge of a family, a constituency or a country have to answer.

DEBUNK THE MYTH AND SEE THE TRUTH ABOUT GE CROPSAND HEALTH

and see the DIRTY SECRET AGENDA behind all that.

Monsanto, the US Military and the US government have colluded to track and disrupt both anti-GMO activists and independent scientists who study the adverse effects of genetically modified food and the health effects of the products released by the chemical industry. The “New Alliance for Food Security and Nutrition,” a thinly-veiled Green Revolution 2.0 that aims to uproot autonomous family farming systems throughout Africa and replace them with toxic monoculture systems controlled by multinational corporations like Monsanto needs to be exposed further.

Help us to hang on, to stand tall and to inform you independently: Donate by quickly creating a safe and free Skrill account (will also help you with other secure and quick money transfers) by going to https://account.skrill.com/signup?rid=59713194 and send from there whatever you can afford as a small donation to africanode@ecoterra.net – it is very simple and double-safe.
If you have got no time to march yourself, please help us to walk the talk for you.