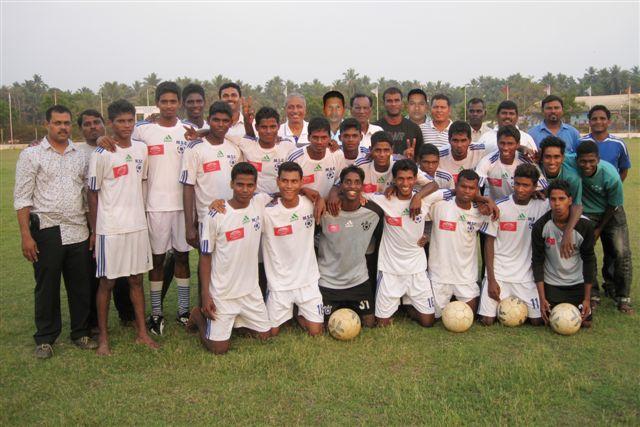 Margao, the Goan city is like any other Indian city. It has its charms and shortcomings. The white wash churches and the Hindu temples abound here. The Latin influence is very much evident in the architecture in the lanes and by lanes of Abade Faria road. The Latin quarter here extends all the way to Borda and Old market areas of the city.

On the darker side, people here are crammed into private buses like sardines.  Out on the streets pedestrians jostle for space and vehicle owners honk and argue over parking space and a host of related issues. The city fathers to top it all are clueless in garbage management, as a result mounds and mounds of garbage is seen everywhere in the city.

With so much things to tackle to do the city councilors have time and commitment to fit sports into their agenda and use it as a tool for social uplift of the poor and marginalized youth of the city.

The promotion of Margao Sports Club into the top tier of the Goan football league- Goa Professional League is the best thing which has happened for the poor man’s game in the city.

Here is a platform and a brand which needs to be promoted and needs the backing of the people who count.

Margao has a rich social, cultural, political and sports history. The present Chief minister of Goa hails from Margao, a keen sports lover. On the cricketing front, Goa has its own MCC  – not Melbourne Cricket Club or Marelyone Cricket Club but Margao Cricket Club. Goa’s MCC is famous for many reasons, but one that stands out is involving Dilip Sardessai. Sardessai , who was born and brought up in Margao is the only Goan to have played test cricket for India.

Margao is the new baby of Goan Professional League. It delivered the knockout blow to St Cruz club of Cavelossim last season in the race to the top tier of Goan football.

Incidentally margao is the second club with a city name which is featuring in the top division of the Goa League.

Vasco Sports club, the club from the port town city is the other one and was recently dubbed as the People Clubs. The white and black brigade is the oldest club in the top-tier of Goan football and has had survived many odds.

Margao Sports Club is the new baby of Goan Professional League. The new arrival into the elite group was born in   and has since fought their way into the eight-team top tier league of Goan football which kicks off in August.

The clubs based in the south of Goa however have grand plans and dreams. They aim to one day qualify in the Indian professional I-League.

“Our Short term plan is to build up a good keeping in mind the vision of our Management & Executive Committee to play in I-league. Our Long term plan is to start the football training centre in Borda at grass root level with good infrastructure and train them and participate in tournaments organized by Goa Football Association under-14, 16 and 19  so that the same boys can play for our senior division club.And, we will you approach the SAG (sports Authority of Goa) and MMC for the monetary help.

But does the name of the city bring any undue advantages for the club from the commercial capital of Goa. As of now no, say the club official.

India may be a booming market, unaffected by the global economic recession but that does not count for Goa. Goa is a small market. It does not make business sense for top business houses to invest in Goan clubs.

The reach of the Goan clubs is miniscule. And, local football does not sell for advertisers who look for cricket to reach to their targeted audience.

So what do people like Aleixo Noronha of Margao Sports Club do to carry forward their big ambitions of playing in the I-league, the top professional league of Indian football.

They have to virtually beg for sponsors and they are hard to come by.

But people like Noronha are unaware that Margao in itself is a brand. But a lot of spade work needs to be done on that count. And it here the game administrators come into pictures in educating guiding and drawing the development chart of Goan and in turn Indian football

A city entity which can see but the concept has yet to tick off. We are far behind the clock. Miami, New York are home to several city entities of Baseball, National football league and NBA but why not Margao’s name should not be associated with football.

A team supported by the Municipal council from the tax payers money and the club in turn can undertake the social responsible roles by helping the under privileged children and wean away some the poor children from the evil vices.

But there are several road blocks for that as we are yet to look forward to football as tools to fight away from poverty aka like Brazil.

Noronha informs me that the club was formed in 1992 and has around 120 members and its membership is restricted, it is open for the resident residing in Borda, Vidyanagar, Agalli, Gogol and New Vaddo, these areas are part for Margao Municipal Council and fall in Fatorda Assembly Constituency, which is represented by Bharatiya Janata party member Damu Naik (Goa elects 40 Members to its Assembly, the term which lasts for five years).

The club is keen on embarking on a new recruitment drive for membership.

“So far nothing is decided (membership), we are thinking for increasing the same so that our fan base increases.”

Regarding recruitment for new players Noronha said: “We have asked our coach to recruit some new players for this season keeping in mind the existing player’s strength and weaknesses  at individual level and well as team level and fill the gap wherever it is required so that we may have a new balance team for this season, where we can compete with the other Clubs which are playing  in the I-league.

“After the recruitment is over we will sit with the coach with the list of players, finalize the plan by setting the goal, with plan of action, analyze the players strength , weaknesses based on these identify the training needs  -physical as well as technical , with counseling so the that  players confidence is build  up,”

Indeed a challenging task awaits Margao Sports Club both on and off the field.