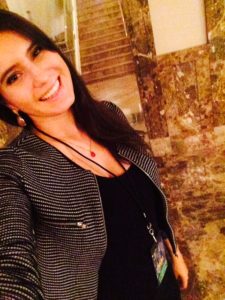 Mariana Wahrhaftig was born in Brazil, but relocated to Montreal.

Growing up as a child in Brazil, Mariana Wahrhaftig had a big imagination. She would explore this through film, music, and video games, and knew from a young age that she wanted to be involved in the creative process of what she loved. Every time she would see a new music video, or put a controller in her hands to play a new game, or watch a movie with her father, she felt an excitement that only comes when being involved with your passion. Now, Wahrhaftig is a successful producer and director, and has the opportunity to do what she truly loves.

Wahrhaftig’s real adoration for video games allowed her to work become a producer and lead creative for The Legend of Zelda: Symphony of the Goddesses- Master Quest, a concert series based on the successful Nintendo video game franchise.

“I fell in love with video games, mainly Nintendo games, which really had an impact on me growing up,” said Wahrhaftig. “When I was around nine years old, I was introduced to the game The Legend of Zelda: Ocarina of Time, and ever since I dreamed of one day making a Zelda movie.”

The concert series has been extremely successful across North America, and received very positive reviews. Wahrhaftig has had similar success producing and directing music videos for Chadler Juliet and the band RVLS.

“I like the fast paced work, I love the production days, seeing everything come together, and above all, seeing the music come to life,” she said. “I loved that during my work at the Zelda Symphony. I just loved seeing the arrangements come to life on the screen and seeing the reactions of the people in the audience. It was truly incredible.”

Wahrhaftig also produced Riverjones’ Lifetime music video, and Tron Sepia’s Factory music video, allowing her work to be reached by tens of thousands of people. She started out working on Eric Speed’s Maniac music video, which has over 860,000 views on YouTube.

“It was while studying film in university, that I got a job as a music video production manager. The director liked my work, and kept calling me bak for the following projects, and I found out I liked producing and was really good at it. So I continued producing music videos and have loved it ever since,” she said. 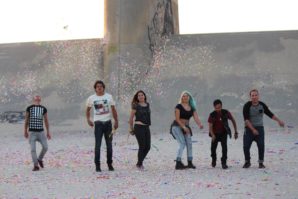 Mariana Wahrhaftig (centre) with the band RVLS at the end of the shoot at the Sepulveda Dam.

Wahrhaftig also has had success with film, showing how versatile she really is. She was the producer for the film Hello, Erick, and started working on films from a young age. The first film she worked on, Momentos is about a homeless boy in Brazil who just looks forward to moments he can play with other kids and be normal. Wahrhaftig was just 14 years old when she directed the film, and won the best photography award at her school at the time.

“I had a big group of friends at school, and I used to come up with these ideas of making a movie. I always seemed to get every one of my friends on board. We were around 12 years old, when we decided on making a horror movie. We had no experience, and no idea of what we were doing, but I just went ahead and wrote a script. We used to rehearse constantly asking to use classrooms at the school, and a friend of mine called multiple real film companies asking for quotes on equipment. We never made the movie, but I learned that people believed in me, and would get involved in my projects, which is something that had a huge impact on my life,” described Wahrhaftig.

Matt Allan Smith, a director of photography, has worked with Wahrhaftig on a variety of music videos. He describes working with her as a great pleasure.

“Mariana satisfied the producer role to the fullest, making sure I had all the resources, equipment and crew I needed to achieve our look, which meant a smooth production for everyone involved. And beyond being proficient and professional, she was also just plain fun to be on set with,” said Smith.

Despite being able to work on productions based on her passions, Wahrhaftig is looking forward to working and making a difference in the world. She recently has been invited to work with an NGO called SOSH2O, to build water awareness among young filmmakers. She will be making videos for them as well as running a video production contest, that will bring together people from all over the world to show their water related issues and solutions in their communities, as well as to give young talents a voice.

“I like work that has a purpose bigger than just the entertainment factor,” she said.

No matter what she is working on, Wahrhaftig can be expected to ensure that it is a success.

“I came from an innovative town in the south of Brazil, and I grew up dreaming about things that seemed out of reach for anyone else,” she concluded. “But for me, they are part of my journey, which has just started.”