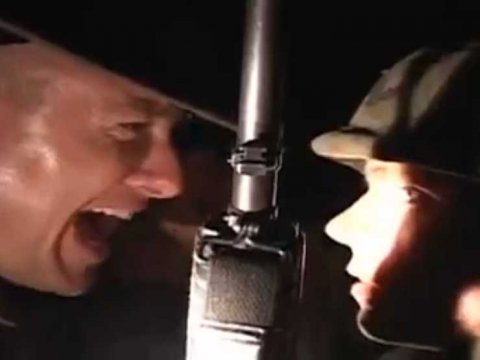 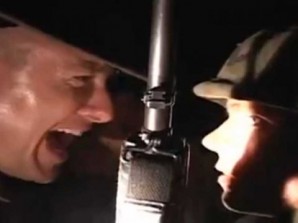 Drill instructor screams at recruit at Camp Lejeune, N.C. in the 1980’s. Unknown to either of them at the time they were drinking contaminated water.

It is a story of “trust betrayed” – the untold story of mass poisonings at Camp Lejeune! For over four decades, reports have surface of water contamination at the Marine Corp base at Camp Lejeune, North Carolina. As is so typical in such situations people refused to deal with the problem or take responsibility for it. It was only after the death of thousands and the exposure of over one million Marines was it ever addressed.

The earliest reports were of so called “unexplained infant deaths” happening in clusters at Camp Lejeune going back to the 1960’s. But is was only in the 1980’s, when people determined a possible cause.

It was discovered that samplings of the two main water systems (Had not point & New River) came back as “highly contaminated with low molecular weight halogenated compounds.”

Residents at Camp Lejeune (Tarawa Point) were finally told about water contamination on April 30, 1985 in a “Notice to Residents of Tarawa Terrace, from the base commander, Major General Buehl (source: Gen. Louis Buehl, 56, No. 3 in Marine Corpshttp://www.nytimes.com/1988/10/08/obituaries/gen-louis-buehl-56-no-3-in-marine-corps.html).

The general said in a signed notice “There is no definitive State or Federal regulations regarding a safe level of these compounds, but as a precaution, l have ordered the closure of these wells for all but emergency situations when fire protection or domestic supply would be threatened.

Ten days later, the Jacksonville Daily news reported about the chemicals in the base wells.

Then on May 11, 1985, the Wilmington (NC) Morning Star also reported on the water problems at Camp Lejeune.

Source: The Few the Proud, The Forgotten, http://www.tftptf.com/page3.html

On May 15, 1985, the state’s Department of Natural Resources and Community Development notified the base commander that state standards ” had been violated in ten wells containing at least nine organic contaminates”, including a degreaser Trichloroethylene (TCE) and Perchloroethylene (PCE).

Fast forward to July 2009 a lawsuit was filed alleging that the government knowingly exposed thousands of Marines, their families and civilians at Camp Lejeune to highly contaminated drinking water.

The lawsuit went so far as to accuse the U.S. Government, through agents within the DoD knowingly exposed “hundreds of thousands of Marines, sailors, family members and civilians employees to highly contaminated drinking water at Camp Lejeune, while at the same time disseminating disinformation to those exposed in an effort to minimize the significance of their exposure.”

It seems the base commander and his subordinates actually stifled, bullied, and outright ignored victims.

In the case of Camp Lejeune, the Navy and Marine Corps turned to dissembling, stonewalling, obfuscation, and refused to notify people they had been exposed to contaminants.

Ultimately it was determined that the Camp Lejeune contamination constituted the largest incident of a poisoned water supply in U.S. history. Almost a million Marines and family were exposed!

See video: The Few, the Proud, the Forgotten – betrayal of trust http://www.youtube.com/watch?v=d3S6QRkhqPI