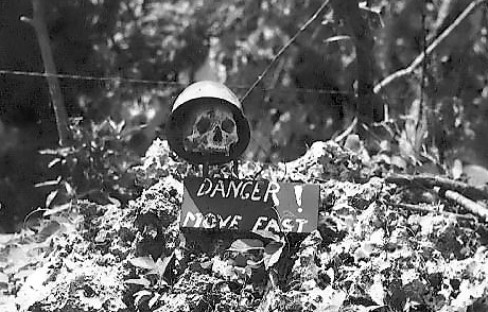 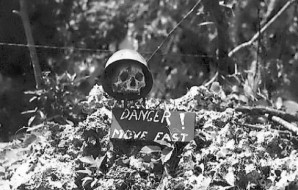 “The Japs were just bombing the hell out of us”, he said. “Guys were dropping. Shells are falling. I’m running with my rifle at high port and a shell comes between my legs then skips about 10 to 15 feet in front of me and it didn’t go off”, said Nasby.

Ace Nasby, a decorated world war two veteran believes he should have “died three times when the 1st Marine Division invaded South Pacific islands in the fall of 1944”, according to an article in the Las Vegas Review Journal.

One experience in particular “terrified the hell out” of him. It happened when the assistant gunner from New York Mills, N.Y., made the landing assault with the 1st Marines on Peleliu.

“When I hit the beach there were bodies all over. I don’t know why I thought so but I just thought in my mind, supposing’ I see a hand,” Nasby said. “No farther did I go 10 or 15 steps there was a hand sticking out of the sand and it had a watch on it. There was no body attached to it.”

He cheated death once when he was running across an airfield on Peleliu.

“The Japs were just bombing the hell out of us. Guys were dropping. Shells are falling. I’m running with my rifle at high port and a shell comes between my legs then skips about 10 to 15 feet in front of me and it didn’t go off.”

The second time he ducked a fatal bullet was when he and another Marine were carrying ammo boxes for a machine gun.

“A sniper opened up on us”, he said. “We both jump in a hole. We sit there for about five minutes. We hear shooting going on. Finally the word comes out, ‘Let’s go.’ So I get up out of the hole. I’m stretching. The guy next to me starts getting out of the hole. He gets to the cusp. Bang. Right in the head. Why that son of a bitch shot him, I don’t know. I should have been the one who was shot.”

Nasby’s third escape from death happened when he was with another marine. They were taking a hill with support from a tank. They had reached the crest of the hill. “The tank quit firing. But when we got up to the top they started to open up again. I guess they thought we were Japs,” he said.

“They let off six rounds. I drop to the right. Benny, he ran maybe 30, 40, 50 feet. The tank stopped shooting and I get up looking for Benny. He’s on his left side,” he said, describing the deadly wounds from the friendly tank fire. “Now if I had run with Benny I would have gotten the same treatment” (source: Veterans Day: Soldier, sailor and Marine share war experiences http://www.lvrj.com/news/veterans-day-soldier-sailor-and-marine-share-war-experiences-178551741.html).

Filed under: Military, News
Share Tweet Pin G Plus Email
previous article: One of al-Qaeda’s most dangerous terrorist is still on the loose
next article: Russia seeks to bolster its sea-based nuclear attack capabilities