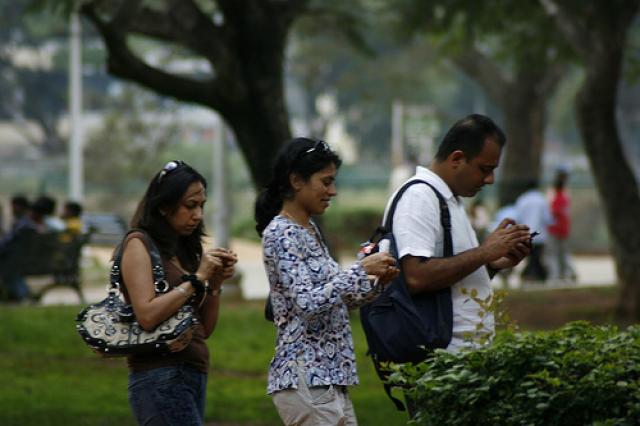 This is a classic story of marriage with the help of Mobile phone, in spite of the Bride and the Groom being 4000 Km apart. Quazi Moulana Alamgir solemnized the Marriage as per Shariat Law a few days ago. Moulana Alamgir said, the couple uttered ‘Kobul’(meaning ‘accepted’ in Bengali Language) over phone to each other ‘thrice’ in his presence to complete the marriage. For ensuring further social approval of the marriage, Irwin’s father Ohedul held a grand reception also attended by groom’s side.

The bride is 18 year old Irin Biswas and Groom is 27 year old Safikul Islam. Irwin is living in Mehdipara village (235 Km from Calcutta) of Murshidabad District of West Bengal and the Groom is employed in Dubai 4000 Km away earning about Rs.40000/- a month.

After marriage Irvin said she had seen Safikul only once from a distance about one and a half year ago. Shyly smiling Irwin added, “Although he (Safikul) too is from this village, I have never spoken to him. I agreed to this marriage as my parents arranged it. Since our marriage, I speak to my husband daily over phone.”

Safikul said (over phone) that he had to agree to the long distance wedding as his employers refused to grant him leave. He is hopeful to come back home in September to unite with  his wife.