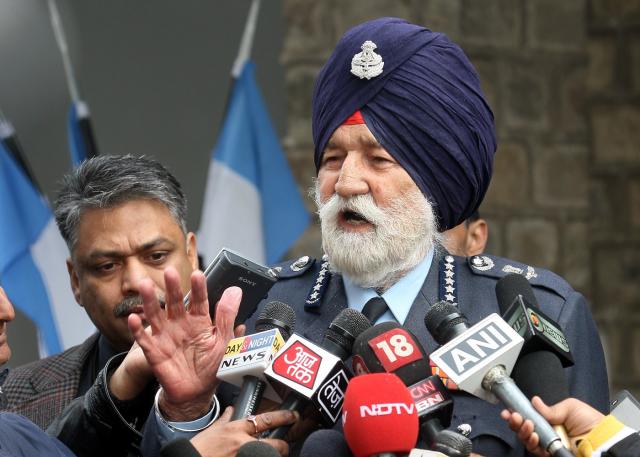 , January 20 (Scoop News) – Marshal of the Air Force Arjan Singh today exhorted all to take pride in their uniform. He reminded all to continue to be the disciplined force for which Air Force is known for.

The Marshal was addressing to personnel of the Air Force Station Jammu station after his arrival to .

He asked everyone to show professionalism in every activity. He also lauded the role carried out by Air Force Station Jammu as the Guardians of J & K. He wished all the personnel and their families very best.

Earlier Marshal of the Air Force Arjan Singh, DFC visited Air Force Station He arrived at the base in a special aircraft of the IAF and was received by Air Commodore Nitin Sathe, Air Officer Commanding, Air Force Station Jammu. He was given a formal guard of honour by the air warriors, on his arrival.   Later he was briefed on operational matters by Air Vice Marshal P S Gill, the Air Officer Command of J&K.

The Marshal visited the various units and interacted with all personnel. A Museum of a Helicopter Unit christened as ‘THE CONDORS’ was inaugurated by him. The Unit in its 23rd year of its existence has flown extensively in J & K area carrying out air maintenance task for Army and aid to civil power. The museum displays a photo exhibition of the extensive operational flying carried out by the unit in the inhospitable terrain of J & K from Siachen glacier to valleys of Kargil, Gurez, Rajouri and Doda. The Marshal lighted a lamp in the memory of brave air warriors of the Helicopter unit who laid down their lives in the service of the nation. Later, he inaugurated a newly constructed Living In accommodation for the Air Warriors, which is named after the Marshal as ‘Arjan Singh Block’.

Speaking to media persons at the Air Force Station, the Marshal recounted his days as a fighter Pilot on combat duties in J&K theatre.

According to Lt Col Biplab Nath,PRO (Defence), that being the only five star officer in the history of Indian Air Force, his visit to the city adds another glorious chapter in the history of this holy city. His personality in the crisp uniform mesmerized the minds of everyone who got a glimpse of his aura.

He said Arjan Singh was born on 15 Apr 1919 in Lyalpur (presently in ). In 1938, he was selected for the Empire Pilot Training course at RAF Cranwell at the age of 19 and was commissioned in 1938. He received the Distinguished Flying Cross (DFC) in 1944. On 15 Aug 1947, he had the unique honour of leading the fly-past of over a hundred IAF aircrafts over , over the Red Fort.

He became the Chief of Air Staff on 01 Aug 1964 in the rank of Air Marshal. Arjan Singh was awarded the Padma Vibhushan for his leadership in the Air Force.

Subsequently, the rank of the CAS was upgraded to that of Air Chief Marshal and Arjan Singh became the first Air Chief Marshal of the Indian Air Force.   In 1967, Arjan Singh had the unique honour of being invited to take the salute at the passing out parade of the , Cranwell, and presented the `Sword of Honour’ to the best cadet. He retired in Aug 1969, thereupon accepting the ambassadorship of . He also served as Indian High Commissioner to and Lt Governor of . In recognition of his services, the Government of India conferred the rank of the Marshal of the Air Force onto Arjan Singh in Jan 2002 making him the only ‘Five Star’ rank officer in the IAF.