One can say without equivocation that the most important date in the National football league (NFL) calendar is the boisterous super bowl. “The Super Bowl is the annual championship game of the National Football League (NFL), the highest level of professional American football in the world. The game is the culmination to a season that begins in the late summer of the previous calendar year.”  More than 100 million people around the world are expected to watch super bowl game.

“A defensive end, Martin has competed against the league’s leading offense in practice and contributed to a six-game winning streak. The Falcons won the NFC with an 11-5 record and defeated Seattle and Green Bay, the latter 44-21 in the NFC championship game. Atlanta reached its second Super Bowl, including a 1999 loss to the Denver Broncos.”

“Martin was drafted by the then-St. Louis Rams in 2015, a seventh-round pick from Memphis. He holds the Tigers’ career sack record with 22 ½, highlighted by a junior season of 11 ½ sacks and 14 ½ tackles for loss and all-American Athletic Conference honors in 2013 and 2014.

He contributed to a one-season improvement from 3-9 to 10-3 by his senior year. Off the field, Martin was an all-academic selection, Allstate AFCA Good Works Team nominee and winner of Memphis’ Zach Curlin Award, given to the school’s top male student-athlete. Martin played during preseason games with the Rams and later spent time on the Tampa Bay Buccaneers’ practice squad. Prior to being signed by the Falcons, he was back at Westside between holiday breaks offering advice to Wolves players.”  (Houston Chronicle)

During his college days, playing as University of Memphis defensive end, Martin was named to   Lombardi Award watch list in 2014. And being in super bowl is a result of his vim athleticism and God watching over him. 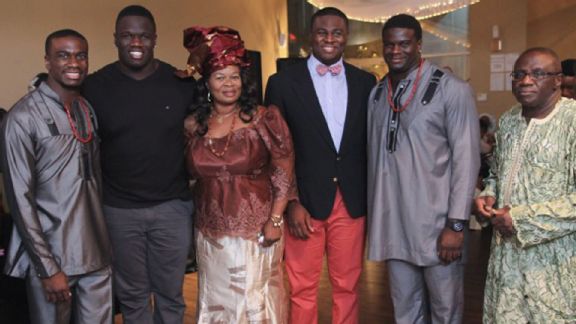 Martin Ifedi is not the only Ifedi in NFL, his younger brother Germain Ifedi made the first round pick of the American National Football League (NFL) 2016 and was drafted by Seahawk Seattle. Their parents Ben and Victoria Ifedi are immigrants from Umuoji, Anambra State, Nigeria.

Filed under: American Football, Sports
Share Tweet Pin G Plus Email
previous article: 5 Tips To Find Out If Your Girlfriend Is Seeing Someone Else
next article: Abused Dog Living in Hell Finally Rescued After 7 Years