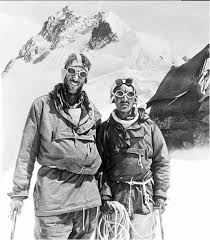 According to Siddhartha the Buddha, life comes into existence when mind and matter combine. His meaning was that the interaction of mind and matter produces energy that moves things and people. Nepal’s Sherpas, the original mountain citizens, live at the foothills of the Mount Everest in the North of the country. Their mind frequently interacts with the Mount Everest. In overall terms, they are one with the snowy mountains. This was equally true in the 1950s. New Zealand’s Sir Edmund Hillary’s mind powerfully interacted with the Mount Everest. He joined an ambitious British Everest Expedition team under the leadership of John Hunt in 1953.

From material life perspectives, even the games of ignorance are sometimes very interesting and inspiring. The Buddha’s teaching was to profoundly understand the Law of Nature—he called it Dhamma in Pali language—and mindfully unionize mind with it to become peaceful and happiy. But it is true that human beings want to demonstrate to human beings by conquering the Nature. Human beings are hunters and explorers by their very nature. Siddhartha the Buddha emphasized on exploring within mind as the universal space, while normal people naturally stress on tangibility to quench their sensory thirsts.

The thirst to conquer the Mount Everest definitely was strong in Edmund Hillary and Tenzing Norgay. They conquered the Mount Everest at 11:30 in the morning of 29 May 1953, as historical records show. Their will power to be on the top peak of the world was far greater than their attention to save their life.

Remembering the historical May 29 is especially important for Nepalis, especially the Sherpas, and mountain lovers. Their conquest then attracted the attention of the world to Nepal’s Mount Everest, measuring 29,864 feet (used satellite technology to measure it in 1987).

The Mount Everest was far more exposed to the international community through news media; consequently, international tourists began to flock to the Everest region. This flow of human beings became instrumental in developing Nepal’s tourism, especially in the region of mountain Sherpas. Sir Edmund Hillary and Tenzing Norgay Sherpa played a vital role in arousing curiosity among the explorers and adventurers in many parts of the world.

Currently, the Himalayan Trust (New Zealand) established by Sir Edmund Hillary himself and the Sir Edmund Hillary Foundation of Canada are active in helping the Sherpa community in the Everest region in the sectors of education, health and environment.

A hearty tribute to Sir Edmund Hillary and Tenzing Norgay Sherpa, the first ones to set foot on the peak of the Mount Everest!