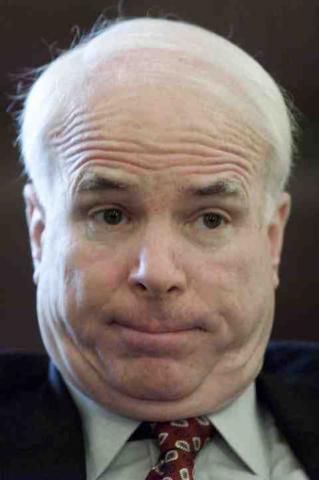 At a speech in Florida yesterday, Sen. John McCainmade a baffling pronouncement: The rising discontent in our country is not due to job losses, home foreclosures or the health care crisis, but rather the fact that we aren’t passing a bad trade deal with Colombia.

Here’s what McCain had to say at yesterday’s event:

We have made progress toward this vision by expanding the benefits of free commerce, through [the North American Free Trade Agreement], the Central American Free Trade Agreement, and our free trade agreements with Peru and Chile. But the progress has stalled; our longstanding bipartisan commitment to hemispheric prosperity is crumbling. We see this most vividly in Barack Obama’s and Hillary Clinton’s opposition to the free trade agreement with Colombia. The failure of Congress to take up and approve this agreement is a reminder why 80 percent of Americans think we are on the wrong track.

What country is he living in?

Maybe McCain is spending too much time listening to the lobbyists who run and fund his campaign—one top backer actually lobbies for Colombia’s government. Clearly, he’s not listening to the millions of working families who are unhappy about lost jobs, shuttered factories, foreclosures and rising costs.

Nor is he thinking about the exploited Colombian workers who face intimidation, threats and even murder if they try to secure their rights at work. Last year, 39 trade unionists werekilled in anti-union violence in Colombia, and 24 have been killed already this year—more than one a week.

John McCain glossed over horrific human rights abuses and the deaths of hundreds of Colombian union activists today when he urged Congress to pass the Bush administration’s ill-conceived Colombian trade pact. Workers in Colombia are targeted for violence and blocked from joining unions to lift their lives and prevent exploitation, making fair trade impossible. In fact, Colombia remains the most dangerous country in the world to be a union member. The fact that McCain believes not passing Bush’s bad trade deal with Colombia is the reason Americans think we’re on the wrong track is a measure of how out of touch he’s become with working people’s concerns.

If McCain wants to be taken seriously by working families, he needs to listen to their concerns. They want an economy that works for everyone, not lockstep support of bad trade deals. Workers here and around the world deserve a fair trade policy that protects jobs and the freedom to form unions.

Filed under: Politics, US
Share Tweet Pin G Plus Email
previous article: Apaches Routed by the Feds in Southern New Mexico
next article: Mine Workers Back Obama for President