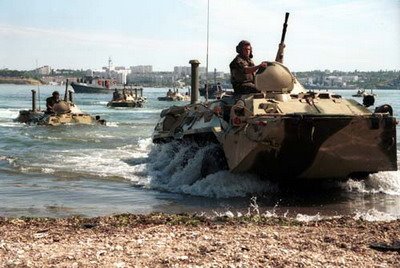 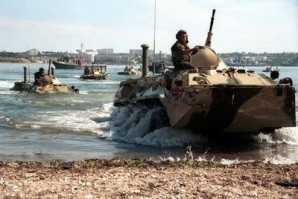 Elite Russian Marines conduct amphibious landing, during military exercises. 2014. Motto: Там, где мы, там — победа!
(There, Where We Are, There is Victory!)

On April 25, 2014 U.S. Senator John McCain (R-AZ) released the following statement on the situation in Ukraine:

“Secretary Kerry can be commended for speaking the truth about Russia’s track record of lies, deception, aggression, and abject failure to fulfill the commitments it made recently in Geneva to de-escalate the crisis in Ukraine. The problem is, Secretary Kerry’s rhetoric and threats are not backed up by actions from the Administration that are capable of changing President Putin’s calculus and behavior. This is an unfortunate pattern: Whether it is Ukraine, Syria, Asia, or elsewhere, the Administration is long on talk and short on follow through.

“The cost of this in Ukraine is a perception of weakness that President Putin clearly interprets as a license to commit further acts of aggression. As a result, the situation in eastern Ukraine is now closer than ever to the possibility of open conflict. Hollow threats are worse than silence. Now is the time for more decisive actions. The United States needs to expand sanctions to major Russian banks, energy companies, and sectors of its economy, such as the arms industry, which serve as instruments of Putin’s foreign policy. NATO needs to move toward a robust and persistent military presence in central Europe and the Baltic countries, including increased missile defense capabilities. We need a transatlantic energy strategy to break Europe’s dependence on Russian oil and gas. And we need to respond to the Ukrainian government requests for meaningful military assistance as part of a long-term effort to reform and rebuild its armed forces.

“These, and other actions, are urgently needed to impose real costs on Russia for its aggression and military intervention in Ukraine, which is ongoing and escalating. Absent steps such as these, President Putin’s ambitions will only grow and the crisis in Ukraine will likely worsen and could potentially spread to other countries in the region. America must lead this effort to deter President Putin, and we must urge our European allies to join us. But if our allies are unwilling or unable to do so, America should act on its own. The situation is to dire to continue a policy of tough talk followed by minimal action.”