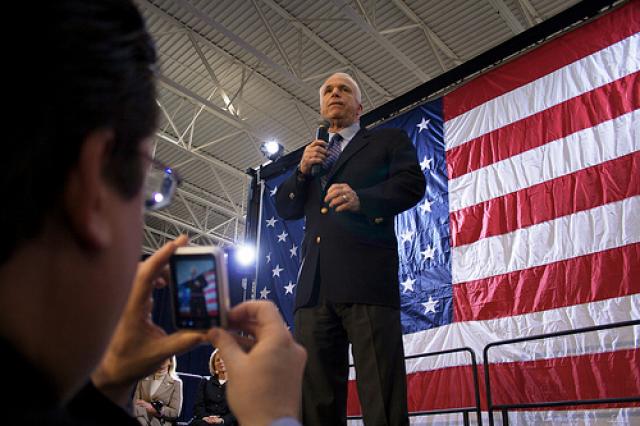 Since Senator Barack Obama of Illinois had clinched the Democratic nomination, presumed GOP nominee Senator John McCain of Arizona did not hesitate to go on the offensive.

It is certain that the contest will be Democratic nominee Barack Obama and GOP nominee John McCain will be squaring off with each other for the general part of the 2008 US Presidential Elections. So far, it looks as if McCain cannot afford to let down his offense or defense.

While the Democratic Party itself is hurting from the contest between Barack Obama and Hillary Clinton, the Republican Party has its fair share of troubles. Many are trying to repair the already damaged image of the GOP. At the same time, many are trying to distance themselves from current US President George W. Bush. However, they need the power of the Bush fundraising machine.

Without hesitation, McCain has sent staffers into the battleground states. He wants get an edge over Obama. Recent polls say that Obama and McCain are in dead heat with each other. This includes new ads that have been launched.

“I’m running for president to keep the country I love safe,” McCain said in the latest TV ad.

Recently, McCain has been raising more funds. However, it has yet to compare to the Obama fundraising juggernaut. In raising funds, Obama has McCain outmatched at the moment. Recently, Obama has received financial support from former donors of Bush. These donors explain that they are frustrated with the overspending and the GOP’s failure in Washington DC.

Should Clinton give her endorsement to Obama, it should give him a further edge.

McCain is preparing to burn off a lot of cash to keep up with Obama. He has been holding fundraisers left and right for the last three months since clinching the GOP nomination.

Expect a hard fought uphill battle between McCain and Obama up until November.

Filed under: Politics, US
Share Tweet Pin G Plus Email
previous article: Policemen Killed, Militants Freed in Pakistan
next article: Should Ballroom Dancing Be Given A Spot In The 2008 Olympics?