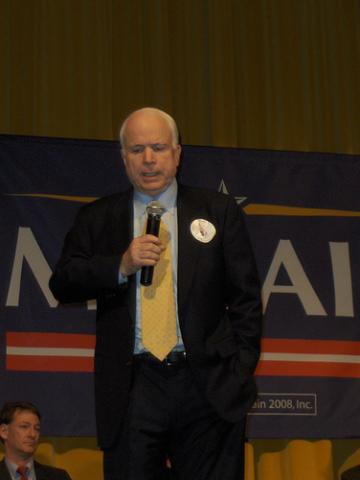 Across the country, the collapse of the housing market has created a crisis of foreclosures that is dragging down the economy. Finding a fair solution for this mess should be a top priority of the next president.

So presidential candidate Sen. John McCain must have a plan to address the crisis, right? Not so. In fact, the Republican from Arizona blames the millions of America’s working families who have lost their homes. They, says McCain, caused the economic downturn.

Of those 80 million homeowners, only 55 million have a mortgage at all, and 51 million are doing what is necessary—working a second job, skipping a vacation, and managing their budgets—to make their payments on time. That leaves us with a puzzling situation: How could 4 million mortgages cause this much trouble for us all?

It’s just another example of how McCain—by his own admission—“never really understood” the economy. (McCain now denies he said that; who wouldn’t, running for president?) In the face of the nationwide crisis brought on by predatory lending, stagnant wages and vast wealth inequities, McCain says it’s the fault of home owners.

McCain compounded the outrage of his comments by making them before a California audience. California has been hit hard by the housing crisis. The state has the second-highest foreclosure rate in the country, with more than 57,000 foreclosures in January—120 percent higher than in January 2007.

McCain, and the lobbyists who run his campaign, has raked in money from the banks and mortgage lenders whose irresponsibility helped create the crisis. So he can’t point the finger at them—he needs the campaign cash. Meanwhile, although he hasn’t shown up in the Senate too often to vote in recent months, in 2005 he voted against a bill to discourage predatory lending.

(Check out Think Progress on McCain’s record of denying assistance to home owners.)

Union members, who understand what McCain stands for, aren’t letting him get away with it. While McCain and his wealthy supporters held a $1,000-a-plate private fundraiser yesterday in La Jolla, more than 50 union members from the San Diego-Imperial Counties Labor Council gathered outside to educate people about McCain’s record. The California events follow similar actions in Pennsylvania, New Hampshire and Missouri, all part of the AFL-CIO’s nationwide McCain Revealed campaign to get the word out about McCain’s anti-worker record.

McCain’s failure to offer real solutions to the housing crisis is part of his anti-worker votes on health care, trade, taxes and more.

As writer Ed Kilgore notes, “McCainonomics” is equivalent to “You’re on your own.”

…the GOP candidate thinks those suffering from the housing crisis had it coming. Yeah, that’s right: after laying out McCain’s commitment to corporate tax cuts and a tax-credit based initiative to encourage individual health insurance, he goes on at some length excoriating those who would take action on the housing crisis, and setting forth strict conditions for participation in existing housing relief programs. Market forces will apparently take care of the problem one way or another.

It may take a while, but Americans troubled by the economy and the housing crisis will eventually get the message that John McCain’s idea of economic leadership is pretty much limited to high-end and corporate tax cuts, free trade agreements, an attack on appropriations earmarks, and whatever he means (beyond his support for Bush’s Social Security privatization scheme) by “entitlement reform.”

California’s union members will keep up the effort to confront McCain on economic issues. They rallied today outside a McCain event in Newport Beach and will gather tomorrow at McCain fundraisers in Los Angeles, Pebble Beach and San Francisco.