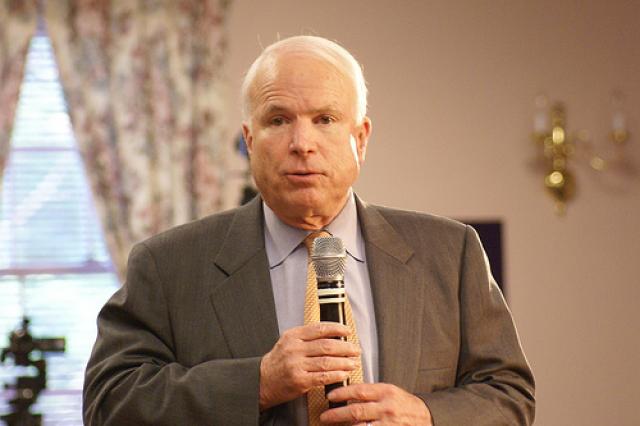 By Seth Michaels for AFL-CIO NOW

While Sen. Barack Obama campaigns in ’s heartland over the Fourth of July holiday, Sen. John McCain is heading out of the country. He’s on his way to , where he plans to stump for anti-worker trade deals like the U.S.-Colombia Free Trade Agreement (FTA).

Apparently McCain decided, in the midst of a hot presidential election season, his time is best spent showing he’s on the side of Big Business—by supporting trade deals that send family-supporting jobs out of the .

Why is McCain so strongly opposed to standards in trade agreements that would not send jobs overseas? Maybe it’s because his campaign is deeply entwined with the lobbyists and corporations who are the real winners in these unfair trade policies. According to reports by The New York Times and the Huffington Post, many of McCain’s top advisers and funders have actively lobbied for the Colombian government and corporations in support of the U.S-Colombia FTA.

He’s so out of touch with ’s workers, he actually touted support for the anti-worker deal in front of a shuttered Ohio factory. He’s claimed that ’s voters are discontented primarily because the deal hasn’t passed. He’s traveling to next week to tout the deal. And he’s even put out a television ad showcasing his support of the U.S.-Colombia FTA and other free trade agreements.

McCain plans to meet with Colombian President Alvaro Uribe. In his meeting, McCain should ask Uribe what he is doing about finding the killers of the more than 2,500 trade union members who have been murdered in Colombia since 1986, including 39 murdered in 2007 and another 24 killed so far in 2008—at a rate of more than one a week. Because, so far, the Colombian government has obtained convictions in only a handful of cases and has done little to stop the bloodshed or guarantee worker and human rights in the country. While meeting with Uribe, McCain should tell him the will not reward murder by granting a trade deal.

AFL-CIO President John Sweeney says McCain’s insistence on a bad trade deal with shows he just doesn’t get it when it comes to what working families need.

Sen. John McCain’s trip to and is yet one more example of how out of touch he is with working families, and how close he is to corporate special interests. Working people have seen bad trade deals send their jobs overseas and decimate their communities, yet McCain enthusiastically supports the proposed U.S.-Colombia Free Trade Agreement and celebrates the effects of NAFTA.

The business leaders McCain will talk to on this visit have done very well under these deals, not surprisingly. However, working people in , , and have borne the brunt of these failed corporate trade policies – just like workers here in the .

The Alliance for Responsible Trade and the National Security Network also have released statements opposing McCain’s warm embrace of the anti-worker U.S.-Colombia FTA and the Bush administration’s policies. When it comes to trade, McCain is pursuing the same failed policies of the Bush years.